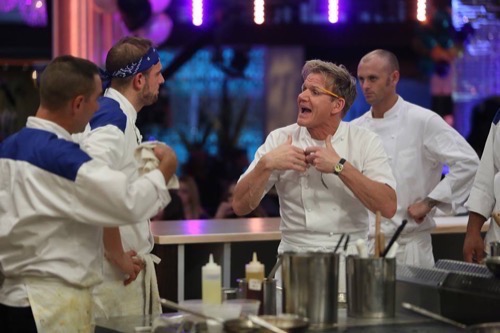 Tonight on NBC world renowned chef Gordon Ramsay’s television series Hell’s Kitchen where aspiring chefs compete returns with an all new Tuesday May 5, season 14 episode 10 called, “8 Chefs Compete,” and we have your weekly recap below. On tonight’s episode, the Top 8 contestants compete to impress a high-school homecoming committee with their Mardi Gras-inspired cuisine.

On the last episode, Chef Ramsay presented the remaining contestants with a series of exotic proteins, ranging from alligator to ostrich to wild boar. The chefs had to prove their creativity in dishing up these exotic meats and passed the test of meat maestros and special guests Jon Shook and Vinnie Dotolo, chefs and owner of Los Angeles restaurant Animal. The team with the highest cumulative score won a day of rest and relaxation, while the losing team had to scrub down HELL’S KITCHEN. Back in the dorms, Chef Ramsay surprised the chefs with one-on-one evaluations that revealed some early rankings among them. In a special one-on-one competition, the two weakest chefs from the two teams competed to remain in the competition. Did you watch the last episode? If you missed it, we have a full and detailed recap right here for you.

On tonight’s episode as per the NBC synopsis, “after last week’s one-on-one competition between two of the lowest ranking chefs, the Top Eight contestants are back for a spirited team challenge. The men and women must present three courses to the discerning palates of the Calabasas High School Homecoming committee, which has requested Mardi Gras-inspired cuisine. The team that serves up the tastiest Cajun fare will win a private pirate adventure away from the kitchen, while the losing team will prepare for the homecoming dinner under the direction of the committee. Find out which contestants past the test and which one goes home.”

Tonight’s episode of Hell’s Kitchen kicks off with the chefs heading upstairs after last week’s eliminations – Meghan rants that it is “go time.” She is sick of being called “everything in the book” by her teammates. The chefs wake up early the next morning and Chef Ramsay calls them and says that they are needed in the dining-room urgently.

The chefs head downstairs and the dining-room has been transformed in to a high-school pep-rally, complete with a cheerleading squad, football players, and a marching band. Chef Ramsay announces that this weekend is Calabasas High’s Homecoming dinner, and it is being held at Hells Kitchen. Three of the students from the high-school will be tasting samples to see which team’s dishes they want to eat at their dinner. The chefs get to work preparing a Cajun inspired seafood platter, beef platter, and chicken platter.

The Red Team gets to work – T and Allison decide to make shrimp and grits. Allison opts to make fettuccini from scratch with the pasta-maker. In the Blue Kitchen Randy prepares a Cajun pasta dish. Michelle is inspired by the kid’s Mardi Gras theme, and uses colorful peppers and okra because it “looks like Mardi Gras on a plate.” In the Blue Kitchen, Nick and Josh are arguing – Nick is tired of how overbearing and bossy he is.

Time is up – it’s time for the Homecoming Committee to taste their dishes. T and Allison present their shrimp and grits, Milly has prepared stuffed shrimp and crab meat on risotto. After tasting both dishes – they choose the Blue Team’s seafood entrée. Now, it’s time for the chicken entrée – Megan wins the chicken portion of the competition for the Red Team. The Red and Blue Team are tied, and the beef entrée will decide the winner. Nick presents his chicken-fried beef, and Michelle shares her beef fillet with okra. After tasting both dishes the Homecoming Committee chooses the Blue Team’s beef. So, the Red Team loses their 5th competition in a row.

Chef Ramsay announces that the Blue Team’s reward for winning the competition is a pirate-themed show and dinner. Since the Red Team lost, they will be staying behind and rearranging the dining-room for the Homecoming Dinner dance. They have to string together the beaded Mardi Gras necklaces for all of the students.

It’s time for the Calabasas Homecoming Dinner – the Red Team and the Blue Teamtake their stations in their kitchens and begin preparing the students’ plates. The Red Team gets off to a rocky start when T catches the entire top of the stove on fire – after an intense couple of minutes the flames go out and Chef Ramsay is relieved that he doesn’t have to evacuate the kids. In the Blue Kitchen, Josh and Nick are already bickering. Josh’s dish of risotto tastes like straight wine, Chef Ramsay freaks out on him and tells him that he can’t serve an alcoholic dish to 17 year olds.

Meanwhile, back in the Red Kitchen – Michelle is holding up production and a minute late with her sliders. Allison tries to help her with the sliders and Michelle shouts at her to stop making a mess of them. She fixes the mess that Alison made, and Chef Ramsay says that the sliders are perfect. Milly isn’t doing much better in the Blue Kitchen – Chef Ramsay screams at him that the cappallini is still raw.

The Red Team and Blue Team try to finish up the dinner service strong, but in the Red Kitchen Allison is getting on everyone’s last nerve because she won’t stop barking orders. In the Blue Kitchen they seem to have the opposite problem, Randy doesn’t seem to be able to follow any orders. Josh notices that his eyes are glazed over and while he is cooking it “looks like no one is home.”

Chef Ramsay says that Randy is safe tonight, and Josh is not going home, he is joining the Red Team. Meghan is then moved over to the Blue team and joins the guys.