House of Lies Recap 2/8/15: Season 4 Episode 5 “The Urge to Save Humanity Is Almost Always a False Front for the Urge to Rule” 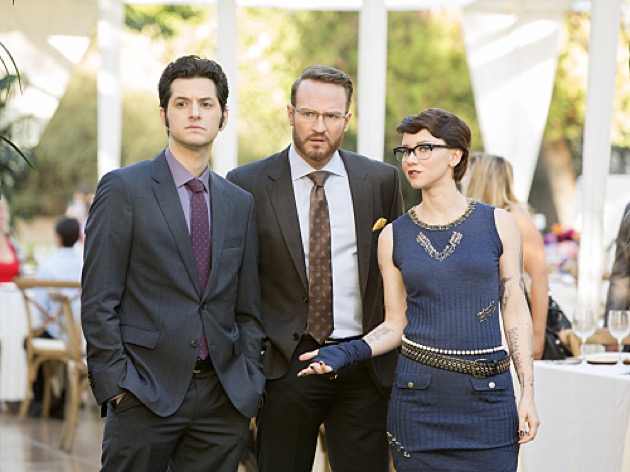 On Showtime tonight House of Lies returns with a another great episode Sunday February 8, season 4 episode 5 called “The Urge to Save Humanity Is Almost Always a False Front for the Urge to Rule,” and we have your weekly recap below. On tonight’s episode, Jeannie [Kristen Bell] opposes Marty’s [Don Cheadle] plan. Clyde [Ben Schwartz] develops feelings for Kelsey.

On the last episode, Marty devised a last-ditch plan when the Gage presentation fell apart and it included orchestrating a move that a volatile Ellis didn’t want. Meanwhile, Jeannie met with a headhunter in her job search; and Doug petitions to join Clyde and Kelsey’s new business venture. Did you watch the last episode? If you missed it, we have a full and detailed recap right here for you.

On tonight’s episode per say the Showtime synopsis, “Marty devises a plan when the partnership between Ellis and Maya reaches a boiling point, but Jeannie opposes it. Meanwhile, Clyde develops feelings for Kelsey when they seek investors for their start-up.”

There’s a party going on for a charity. Marty tells the crew to thank Auntie Denna for sponsoring their table at the event. They do and she tells them it’s creepy. Clyde tells Jeannie they should be hosting a fundraiser for themselves but she’s confident that the merger will bring them back to life. Maya greets Denna and Marty then tells Jeannie she’s glowing but she says she’s a sack of meat stuffed into a cocktail dress.

Maya says she envies her being a mother then pulls her dress open and pops out a boob. Her way too big to be breastfeeding son runs over and latches on. She asks where Ellis is and says he promised to support her. Jeannie goes to call Ellis and the gang is very uncomfortable with the nursing show. Denna says – nice tits – and the guys agree. Jeannie leaves Ellis a message then wants to call from his phone since he may not be answering since she slapped him.

Marty tells her that slapping is not an acceptable parenting technique. Ellis takes the call but refuses to come to the event. He says Maya doesn’t support his charities and Jeannie reminds him that he has none and he explains that charity is BS and he’s done kissing Maya’s ass. He says his ass needs to be kissed instead. She says if Maya balks on the merger, he’s screwed and he’ll be voted out of his own company. She tells him he’s most successful with Maya at his side.

She tells him to stop being a pussy and get there now. Marty is panicking. Jeannie promises not to hit him again and he asks to talk to Marty. He says Jeannie had the bad news but he has good news. Marty tells Ellis he’s on the verge of getting everything he deserves and they just need to keep happy until Maya signs the merger papers. He tells him to come impress the hell out of everyone and make a donation. Ellis says he’ll be there in 20.

Clyde wants to know when Doug stopped breastfeeding and he says he’s not engaging. He finally weasels out of him that he was nursed til four. Kelsey shows up and asks what’s going on and Denna says Clyde just got him to admit he breast fed til four and then asks why Kelsey cut up a $1,000 Chanel dress. Kelsey says her mom bought it but was surprised it was so spendy. Marty tells Denna that Maya has given part of her company to her grad students.

Denna says that was stupid and Marty asks if she can help him leverage that. She says Cal Manchester could be a good target. She asks what’s in it for Cal and he says a major set back in Maya’s electric car production which is good for big oil. Clyde talks to Kelsey about their business plan and Doug pushes back and says Clyde maybe shouldn’t present since he can be off putting. Kelsey sees Danny Buckingham, creator of easiestbuck.com.

She says he sold for $65 million and they should go talk to him. Doug says he’ll talk to him as one child prodigy to another. He walks off and Clyde says he’s not a child prodigy and Kelsey tells Clyde that it’s not really Danny Buckingham. Marty and Jeannie greet Ellis who is annoyed that they’re using clipboards for the charity auction and says it doesn’t scream high tech. He mocks Maya’s charity then says to get it over with and asks for Maya.

Jeannie gets closer to him and Ellis flinches but then says they don’t need to babysit him when he talks to Maya. He says he’s got this and grabs a champagne flute and takes over the microphone. He tells everyone that he’s writing a $1 million check to Maya’s charity. Marty says that’s good if he stops now. Then Ellis starts ranting about how the urge to help mankind is really about power. But then he pulls it back and says she may be the exception to the rule and toasts her.

Jeannie says Ellis is a piece of shit and Marty agrees. Kelsey and Clyde talk to the real Buckingham and she gets pissed when he calls her sweetie. She says he’s an asshole and doesn’t get to invest. She tells him to go away and he says nice dress. She tells him to f- off. Clyde is in a panic. She says they don’t need to pander to rich a-holes that don’t give a shit and says they need to pander to a rich a-hole that does give a shit. He tells her she’s crazy.

Denna and Marty chat up Cal Manchester who was posing for a photo op with a kid. He says he could use some good press since everyone likes to say he’s a raper of the earth. Denna says Marty brought Ellis and Maya together. Cal says that makes him want to rip off his head and piss on his bloody neck stump and asks how this merger to produce electric cars helps him. Marty says Ellis doesn’t want to produce electric cars for the masses.

They tell Cal that Maya is only a partial owner of her company. Jeannie comes over, interrupts and drags Marty away. Denna talks up Cal. Jeannie says she saw him with Cal and asks if he’s bullying her into the merger. Marty says they’re teaching her a life lesson and Jeannie says an amicable partnership is better. Jeannie says his typical slash and burn plan will not work. Marty says Cal is a good contingency plan but she’s not seeing it objectively.

She asks him to hold off pulling the pin on that grenade for now and he agrees. Doug and the kid he thinks is Danny are looking at the auction lists. The kid says he’s still thinking about investing. Who the hell is this kid? Doug offers to write him a college recommendation. The kid points out a gift basket that he wants that has booze in it. He tells Doug he can just go to the closest liquor store and buy him a couple of bottles of vodka and a pack of smokes or else he won’t fully fund the venture.

Doug panics and asks what brand he likes. Ellis is talking to a crowd of people and says his former teacher was a c**t. Jeannie says Ellis is planning a daycare center at Gage and then asks to hold her crying baby. He makes a crack about her adopting a ton of kids. Ellis says Maya built a great little company but it’s time she came back to the big leagues. Maya blows up and says he’s the same arrogant prick he always has been.

She says the things he says sound profound but are garbage. She says f- you and stalks off. Jeannie goes after her and says she knows how she feels but says Ellis showed up and is trying. She reminds her that he donated a million dollars to her charity. Maya says he’s the king of making promises and never following through. Jeannie promises that he has changed and will write that check. Maya says she was miserable during the Ellis era.

Maya tells her that she will not sign the merger papers. Jeannie asks her to hear her out. Marty watches the women talk while Clyde blathers on about being hot for Kelsey. He says he’s not usually attracted to a girl like her. He thinks she may have piercings downstairs. Marty just gives him a blank look that Clyde takes as advice to go for it. He runs off. Jeannie comes over and Marty asks what’s up. She tells him they need to do it his way.

Marty says she’s going to make a horrible old man very happy and she congratulates him on being right. He offers to see if they’re serving crow. Clyde finds Kelsey talking to a guy who offered to put up the seed money. She says he wants to talk after this. Clyde then says after that, the two of them should celebrate. She asks what about Doug and then he tries to tell her there’s something special between them. She says flat out no and he’s shocked. She looks back, thinks then says no again.

Clyde says he heard her the first time and Marty comes over and says to go for it. Then he pats him on the back and says he heard the multiple no’s. Denna tells Marty she’s out of town next week and says it was a pleasure watching him work. She sees Cal talking to Maya and smirks. Doug comes over and says he was about to give booze and smokes to a 15 year old. He says he looked him up. Kelsey apologizes and says she likes that Doug trusts people. Clyde insults him.

Kelsey says Clyde is back in full a-hole mode now that she won’t go out with him. She walks off and Clyde says he just asked her out as a goof. Maya announces the winners of the silent auction. Someone whispers in her ear and she says that Ellis Hightower is the highest bidder on every item. Marty tells Jeannie of course and Maya says payment is expected at the end of the evening and says if you were the second highest bidder on anything, you still have a chance.

Maya comes over with a check to reimburse them for the cost of the table and says she shared with her students to be a good person. Marty takes the $10k check even though Deanna bought the table. She says now her choice is a merger with Ellis or being screwed over by an oil baron. She essentially calls them pigs and says Jeannie will be a terrible mom. Ellis takes the microphone back over and says next year there will be no clipboards in favor of electronic billing. He gets scattered applause.