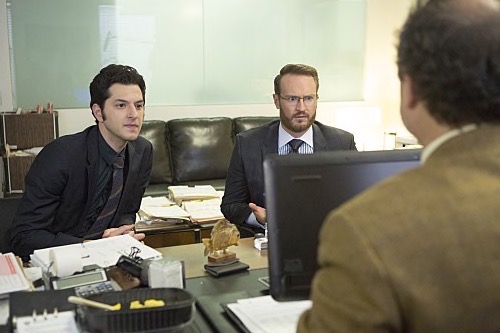 On Showtime House of Lies returns with a another great episode Sunday March 29 season 4 episode 11 called “Everything’s So F**king Obvious, I’m Starting to Wonder Why We’re Even Having This Co,” and we have your weekly recap below. On tonight’s episode, Marty [Don Cheadle] looks to secure his place at K&A. Jeannie [Kristen Bell] receives a proposition.

On the last episode, Marty got into a conflict with Denna when he pitched the CEO of a fast-food chain; Roscoe’s business was exposed, which hurt his status and future at school; Doug and Clyde had different reactions to dating the same woman. Did you watch the last episode? If you missed it, we have a full and detailed recap right here for you.

On tonight’s episode as per the Showtime synopsis, “Marty grows concerned about repercussions from Denna and looks to secure his place at K&A; Jeannie receives an exciting proposition; Clyde reaches out to his father; Roscoe becomes the center of an ugly incident at school.”

#HouseOfLies starts with Marty having photos taken for promo purposes. Doug sticks his head in and says he needs to talk to him. Marty steps out. Doug says Denna is in the building. Marty asks if she has a gun. He says no so Marty shuts the door. He tells Clyde that Denna is there and he scoffs too. Doug is panicking and thinks they should be too. Clyde calls him a jittery twat and says Marty has it under control. He says Marty had him hire a forensic accountant to dig into Denna looking for dirt.

Clyde isn’t happy that Doug has not prepped for their morning meeting. Doug wants to be the one to act as forensic accountant. Clyde says Gideon knows what he’s doing. Doug reminds him he went to Harvard and Clyde mocks him more. Marty is being interviewed for a story when Denna comes in and she knows Amy, the reporter. Amy asks for a photo of them together. She seems surprised he’s doing a press blitz and says he’s looking to cover his ass so she can’t fire him.

Marty heads to the school where he sees the building has been tagged with “die tranny f*ggot.” He heads inside very angry. Roscoe is sitting in the office and Marty asks if he’s okay and hugs him. Roscoe asks if he can go to class but Jeremiah is there and wants to take him home. Roscoe says he wants to stay at school and do his normal thing. They let him go. Marty says he wants to burn this place to the ground and Jeremiah says he’ll give him the matches.

Next we see a meeting at Davis Dexter, the company K&A is pitching. The gang is there without Marty. Teddy Gramatico is the head of the firm and they tell Jeannie they want greater efficiencies and Jeannie says they’re strategies are out of sync and says they’re facing a bloodbath since all of their major patents are set to expire. They tell them about a new cancer drug and Doug says Clyde’s dad has cancer. Clyde tells Doug he hasn’t talked to his dad. Clyde pretends to call him.

Doug says he’s going to hell and Clyde says he won’t talk to his dad there either. Teddy pulls Jeannie aside and asks what she thinks of Brent the CFO. She says he seems passionate about their work but Teddy says the guy is a moron and he wants to fire him. He asks if she’s been to Dantana and asks what night he can take her to eat there. Jeannie says dinners are not good but she can do a lunch. Teddy qualifies quickly that he’s not asking her out and is not trying to get into her maternity pants.

He says he wants to talk to her about the CFO position and makes it clear he wants to offer the slot to her. He says word on the street is that she’s looking around. Jeannie says she hadn’t really thought about it and reminds him she’s giant pregnant. He says by the time it all happens, she’ll have had her kittens. They agree to meet that night. John, the principal, tells Marty they’re checking the school security cameras for the culprit and Marty demands to see it.

John says he needs to check with the school attorneys. Jeremiah says the crucial focus is to make sure Roscoe is safe and this doesn’t happen again. John talks about a bunch of touchy feely solutions and Marty is annoyed. John flatters Jeremiah’s reputation as a psychiatrist and Marty tells John while he’s down there to be sure and work his balls. Marty rants that this is all boiler plate and he hasn’t heard an apology. Marty says not only did John let it happen, he encouraged it.

Marty says the whole purse affair mishandling made Roscoe a pariah and let the students spew hate. John says they have all agreed to back off on the expulsion talk. John says he’s horrified by all this and Marty doesn’t buy it. Clyde does try to call his dad but is worried when he can’t reach him. Jennie asks to talk to Marty after the staff meeting. Turns out Harvey is there waiting for Clyde and says he wanted him to know he’s okay. Harvey asks to talk someone away from Doug and calls him numb nuts.

Marty is acting jovial in a staff meeting and Denna sticks her head in. Grant says he has some exciting news and says he’s this close to reeling in Home Depot. Jeannie says Marty signed Ace Hardware so it’s a conflict of interest. Denna insists they dump Ace to go with Home Depot. Then Rachel says they are locking down Conway Freight but he has another carrier company. Denna says they need to take on the new one. Another person says they’ve got Russell Stover.

Looks like Denna is running out all of Marty’s big clients with her new ones. Clyde has coffee with his dad who’s being judgy about his work. Harvey says he was a risk taker but Clyde just has a steady paycheck. He says Clyde has some desire for instability but Clyde says his childhood was fine because of his mother. Harvey starts talking about how he cheated on his mom and Clyde tells him to reel it back in. Harvey says he’d like a cappuccino in Italy. He asks him to talk him on a trip to Europe.

Clyde says won’t he be dead by then but Harvey says he’s cancer free thanks to the herbalist he’s been seeing. Clyde asks for his oncologist’s name but he can’t remember. Clyde says this is the biggest asshole shit he’s ever lied about and says lying about cancer is a new low. Harvey says he needed a jump start and knew Clyde wouldn’t accept him without a hook. Clyde says all he’s done if be an asshole to him and says he talks about the Holocaust so that next to Goebbels is the only way Harvey can look human.

Clyde tells Harvey he’s a complete failure in every way. Harvey says he’s getting chest pains and Clyde says he’s not buying it and is going to call a cab and send him to the airport and out of his life. His dad collapses face down on the table. Denna says it was a good day for the associated. Marty says it’s clear what Denna did then asks what her play is. He says he knows he’s just a figure head without a client base of his own. He toasts to her evil and she says he already needs a villain.

But then Denna says he made her a villain. She says he wouldn’t be there except for her and says he has spit all over her. She says she gave him more rope than she has anyone and says that makes her an idiot. She tells him to prove that she can trust him. He asks if she wants him to be her little bitch. She says that’s now what she said but then tells him he already is her little bitch.

Clyde comes back to the office and tells Doug his dad died. He laughs then realizes Clyde wasn’t joking. Doug says at least he had a chance to talk to him but Clyde says the talk was what killed him. Doug asks if Clyde is blaming him. Clyde just walks away. Doug wonders how he’s the bad guy when Clyde killed his father. Marty calls Gideon and tells him to make this happen. Marty tells Jeannie that the only dirt he found on Denna was the she used insider information to short Gage stock.

Marty says Denna is insidious and smart then says he’s smart too and calls her a bitch. Jeannie gets a thought and goes to confront Denna to ask if she put up the job offer from Teddy. Denna tells her it’s a great opportunity and says Teddy wants her. Jeannie says this has nothing to do with Marty but Denna admits this wasn’t an act of sisterhood but tells her it’s the job of a lifetime. She calls Jeannie and idiot and walks away.

Jeremiah asks Roscoe if he wants to talk after he gets home from school but he doesn’t. Jeremiah tells Marty that Roscoe isn’t processing this and will have to face it. Marty thinks Roscoe is showing strength. Gideon shows up and asks him about Thomas Altshuler, Denna’s father. He says a guy who stepped in some foreign shit and Thomas bailed him out illegally. Denna had to take extraordinary measures to protect him. Gideon says he should wave it in her face to get what he wants.

Gideon says not to mention his name at all and says to pretend he got it from the tooth fairy. He leaves. Marty calls Amy and she complains that it’s late. He says he has some information for her on Gulf Financial. He tells her about Denna’s dad. Then he gets an email from the principal and watches the security footage. Roscoe did it. Marty calls Roscoe into the room. He says the school sent the surveillance footage. Roscoe is stunned.

Marty says that looks just like his hoodie but Roscoe says a lot of kids have that same hoodie. Roscoe says he doesn’t know who it is. He walks off. Marty sits and watches the feed and says – Jesus Roscoe. He sees his son spray the homophobic phrase on the wall of the school then run off. He wonders what Roscoe is up to.