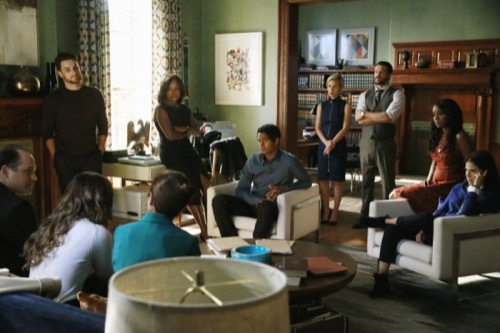 Tonight on ABC How to Get Away with Murder starring Viola Davis continues with an all new Thursday October 15, season 2 episode 4 called, “Skanks Get Shanked” and we have your weekly recap below. On tonight’s episode, a teen’s body is found in the woods, and Annalise (Viola Davis) and her team are hired to represent a suspect in the case.

On the last episode, a high-end sex club was investigated by the team when Annalise took on a new client. Meanwhile, a new motive surfaced in the case against two wealthy siblings accused of killing their parents; and Wes found an unexpected ally. Did you watch the last episode? If you missed it, we have a full and detailed recap right here for you.

On tonight’s episode per say the ABC synopsis “a teen’s body is found in the woods, and Annalise and her team are hired to represent a suspect in the case. Meanwhile, Asher discovers a surprising confession; and Wes uncovers new information about Rebecca’s disappearance.”

Tonight’s episode is going to be great, which you won’t want to miss. So be sure to tune in for our live coverage of ABC’s How to Get Away with Murder season 2 episode 4 — tonight at 10PM EST! While you wait for our recap, hit the comments and let us know how excited you are about this new season.

Tonight’s episode of How TO Get Away With Murder kicks off with paramedics loading Annalise in to the ambulance – Bonnie is dead. Nate picks the law students up in the woods and rushes them away from the scene of the crime in his cop car. Michaela’s phone rings, Nate tells her to answer the phone and act normal.

Back to present day, Annalise is taking a bath and her phone rings – it’s Nia Lahey, Nate’s wife. She summons Annalise to her hospital room, she informs Annalise that she wants Annalise to take care of Nate and love him … and help her commit suicide. Annalise is obviously thrown for a loop, she heads back to her office where her next case is waiting for her.

Annalise meets a teen girl named Zoe, who killed her best friend. Zoe argues that two other girls – Megan and Molly brainwashed her in to killing Rachel, they peer pressured her and roped her in to a revenge plot over a boy. Molly and Megan are arguing that Zoe is a sociopath and she is the ring leader, and she convinced them to stab Rachel. After court, Annalise tells her students to go through the doctor that is about to take the stand’s old cases and try to find a mistake he made in the past that they can use against him.

Annalise has a special job for Michaela, she sends her to Caleb and Catherine’s house to prep them for trial. Annalise tells her to trick them and find out if the brother and sister are “screwing each other.” She needs to know the truth before they go to court so that it doesn’t come back to bite them. Asher is MIA, he is meeting with the district attorney for some secret deal – he lied and told everyone he is sick at home. Laurel and Connor come through, they find a case where the doctor misdiagnosed a teen boy and he wound up killing his whole family. Annalise uses the info in court and seems to make some headway with the judge.

After court, Connor finds Zoe sitting outside and crying. Apparently, the two girls are still bullying her – they called her a “slut” in the court room. Connor tries to give her a pep talk, she argues with him that he doesn’t know anything. Wes sneaks off to visit Nate at the police station, he demands to know what he found out about Rebecca. Nate says that the night that Rebecca disappeared – Frank made 3 phone calls to someone named Sabrina Mancini.

Laurel thinks that Zoe is a sociopath, so she steals her cell phone while she is in court and hacks in to it. They find a video of Zoe, and her friends laughing about stabbing Rachel – in the video they are lying on the floor and pretending to cry the same way Rachel did when they killed her. In the video Zoe laughs that they should kill their teacher next and carve an “X” in to her with a knife. Laurel takes the video to Annalise – and she is obviously shocked. Zoe played all of them, she is a cold blooded killer – and total wackjob.

Annalise shows the video to Zoe’s parents, they tell her to destroy the video. Annalise tells Laurel and Connor that they are deleting the video. Connor is furious – he can’t believe that they are going to get a killer off from a murder charge. He thinks that Zoe is dangerous, and she is going to kill again. They head to court – and Annalise is blindsided when the video is shown in court. Apparently, one of Zoe’s friends had a copy of the video. After court Zoe’s mom freaks out on Annalise – she tells her to fix it ASAP.

The next day Annalise dissects the video, she points out to the jury that in the video Zoe is just copying everything that Megan says. Annalisa is winning the case – and then Zoe cracks and starts screaming in the middle of court that Megan is just a “basic bitch” and she is going to kill her next. After court, Annalise corners Connor – she knows that he slipped the video to the defense. Connor confesses that he leaked the video, but he did it because he didn’t want any more blood on his hands. Annalise reveals that she and Frank still have his car, with her husband’s blood in it, she tells him that if he ever messes with her cases again – they’ll put the murder on him.

Michaela comes through for Annalise with Catherine and Caleb. After hours of questioning them she learns that Catherine is actually a virgin – they go to the hospital to get a doctor to examine her and confirm she is a virgin, that way they can destroy the defense’s argument that the siblings are incest. Meanwhile, Wes gets a big break. He and Rebecca’s brother learn that the reason Frank was blowing up Sabrina’s phone the night that Rebecca was murdered is because her brother works at a cemetary, they think that is where Frank ditched Rebecca’s body.

Tonight’s episode ends with Annalist heading back to the hospital to visit Nate’s wife Nia. She brings a long a bottle of pills that she got from Frank. Annalise had a change of heart – she tells Nia that she thought about it a lot, and she doesn’t think it is right and she is not going to help her. Nia snarks that she killed Sam and didn’t have a problem with it. Annalise tells her that she is not the woman she thinks she is – and then she leaves. Annalise walks out of the hospital, and she spots Nate and Wes having a secret meeting in the parking lot – now she knows that they are working together.