How to Get Away With Murder Recap – “Two Birds, One Millstone”: Season 2 Episode 6 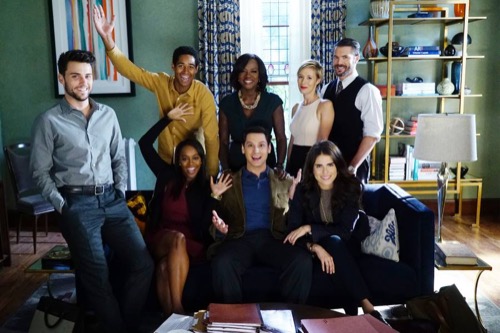 Tonight on ABC How to Get Away with Murder starring Viola Davis continues with an all new Thursday October 29, season 2 episode 6 recap called, “Two Birds, One Millstone” and we have your weekly recap below. On tonight’s episode, Annalise (Viola Davis) has a new client when she represents a transgender professor accused of killing her husband.

On the last episode, Asher had more questions than answers when it came to working for Annalise. Meanwhile, Frank dealt with a matter that hit close to home; and Wes had a dangerous confrontation during his quest to learn more about Rebecca’s disappearance. Did you watch the last episode? If you missed it, we have a full and detailed recap right here for you.

On tonight’s episode per the ABC synopsis “Annalise has a new client when she represents a transgender professor accused of killing her husband. Meanwhile, the Keating 5 discover a new suspect in the Hapstall case.”

Tonight’s episode is going to be great, which you won’t want to miss. So be sure to tune in for our live coverage of ABC’s How to Get Away with Murder season 2 episode 6 — tonight at 10PM EST! While you wait for our recap, hit the comments and let us know how excited you are about this second season.

Catherine and Caleb Hapstall claimed someone was setting them up for the murder of their parents. So on tonight’s episode of “How to Get Away With Murder”, Annalise figured why not work that angle to her clients’ benefit.

Another suspect could draw suspicion away from Catherine and Caleb so Annalise demanded that her students find someone that she could potentially blame. Yet they couldn’t seem to find anyone. At least not at first when everyone with a reason to lie either didn’t have motive or was now dead. So the group did something drastic. They decided to look into Catherine and Caleb’s birth parents.

Although both of their clients demanded they not do that. Neither Caleb nor his sister appreciated that the students wanted to use their birth parents as possible suspects when they both felt they were given better lives by those same people. So Michaela stood up for them on this one. She herself was also adopted and she thanks the decisions her birth mother made for her.

But while Michaela might have honestly been thinking about her clients’ best interest, Connor wanted to know if her attraction to Caleb had anything to do with why she was so sympathetic. And so the group had gotten into an argument because the last time Michaela had followed Connor’s advice was when Wes willingly let her date a drug dealer. Though, apparently, Wes was still continuing to suggest his new friend had been set up by Annalise.

Anyways, as the group began arguing over whether or not they should look into the adoptive parents and if it made either of the remaining Hapstalls look guiltier because they didn’t want to pursue that angle, Laurel looked down and noticed that Catherine had left her IPad behind. And the IPad had been recording their entire conversation. Catherine later said she didn’t trust them anymore so of course she wanted to hear what they said about her and her brother when they weren’t in the room.

And, boy, did they get an earful.

Naturally, afterwards, the siblings were angry that Annalise’s own associates didn’t even believe they were innocent and they took that up with Annalise. So Annalise had to apologize for her flock of “idoits” and for not being there with the Hapstalls and her students because she had taken on another case. Her good friend Professor Jill Hartford had killed her husband in self-defense and the detectives on Jill’s case had wanted to make the incident out to be murder.

Thus Annalise had her hands full and that’s why she outsourced the suspect angle. But after reaming them out, she got her students back in line and she got them to do their jobs. They looked into the birth parents angle and what Oliver was able to find was that the Hapstalls weren’t the only adoption on record. Their seemingly racist aunt had had a child that she had given up and she was using a charity as a front to funnel money to her secret child.

Therefore the fact she left all of her money to this charity means her son had reason to believe he could inherit the entire Hapstall fortune if his cousins were found guilty.

And although Connor told him not to do it, Oliver decided to look into the secret son. Which led to that pivotal moment where he eventually found Philip Jessop and chose to hack into Jessop’s computer. Now at that point Connor said Oliver had gone too far, but it looks like Oliver got carried away in the mystery of it all so he hacked Jessop’s computer as well as the other man’s camera. However that very same camera had a two way signal and so Oliver inadvertently let Jessop in what was going on and it seems he’s now spying on Oliver and Connor.

But none of that compared to what Annalise did. To get her friend off on the charges, she did something she agreed to never to do. She collected evidence on Asher’s father and gave it to the ADA assigned to Jill’s case. She said why bother going after a transgender woman who was forced into defending herself when he could attack a federal judge thereby making a play for an eventual State’s Attorney run.

And the ADA took that offer. So Asher ended up losing his father’s trust because the other man felt his son had chosen Annalise over him. Though he didn’t really. He had chosen Bonnie because Annalise had shown him the tape of Bonnie being molested when she was a little girl and that made Asher sympathize with his girlfriend. Who he then believed killed Sam when he reminded her of her past.

Yet Bonnie didn’t know that Annalise had shown Asher that tape. If she did then might have had something to say about it. Like how Annalise had gone too far. But she never got the chance to say that and sadly it looks like Bonnie is going to have a lot to say to Asher instead.

ADA Sinclair had once again crossed a line. Apparently after she realized she couldn’t use Asher anymore, she decided to take revenge by telling his girlfriend about the crime he seemed to have gotten caught up in. She told Bonnie about Tiffany and how Tiffany had been gang raped by the lake.

So there goes all the trust that Bonnie was just beginning to have for Asher. Though truthfully no one has become more disillusioned than Wes. Wes still believes that Rebecca is dead and tonight Annalise tried to convince him differently by bringing up his dead mother. She said that Wes found it hard to let got seeing as his mother had killed herself and that’s the dead woman was also the reason why he was finding it so hard to trust Annalise.

But he didn’t want to bring his dead mother into anything. He just wanted Annalise to leave and she did. Only just before she left the building, she told Frank to make sure that this time no one would be able to find the body. So Frank did what she said and he buried Rebecca where no one could find her.

And fast-forwards to two weeks, Frank then transported an unconscious Catherine to the woods and she woke up with blood splatter all over her with a cop and a sniffer dog standing nearby.

Thus the real question of the night has to be why Frank? Why did he move Catherine like that? Because at least when he took Laurel to meet his family just before he moved Rebecca that made sense!