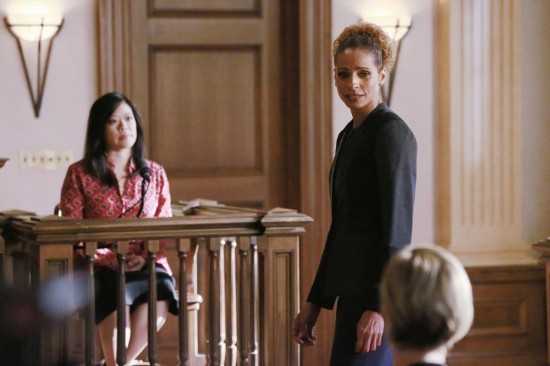 Tonight on ABC their gripping new drama How to Get Away with Murder starring Viola Davis continues with an all new Thursday February 19, season 1 episode 13 called, “Mama’s Here Now” and we have your weekly recap below. On tonight’s episode, Annalise [Viola Davis] is overcome with guilt and seeks help from an unlikely source.

On the last episode, a shocking discovery in Sam’s case changed everything for Annalise and the students. Did you watch the last episode? If you missed it, we have a full and detailed recap right here for you.

On tonight’s episode per say the ABC synopsis “Annalise is overcome with guilt and seeks help from an unlikely source. Meanwhile, Bonnie represents a new client accused of rape.”

Tonight’s episode is going to be great, which you won’t want to miss. So be sure to tune in for our live coverage of ABC’s How to Get Away with Murder season 1 episode 13— tonight at 10PM EST! While you wait for our recap, hit the comments and let us know how excited you are about this new series.

The Great Annalise Keating is in hiding on tonight’s all new episode and unfortunately that means it’s now up to Bonnie to take over her practice. While a very good lackey, for the most part anyways, Bonnie will not being winning Lawyer of the Year anytime soon. She’s good but all of her blunders together is what gave the cops in the first place their search warrant on Annalise’s home. So it’s a good thing that Bonnie has the students on her side. They’ll be doing their best to give her all the evidence she needs to help her client however no one wants Annalise’s forced seclusion to last for long.

Bonnie and the students are currently working on a rape case. Their client, a woman, has been accused of raping her male patient.

So right away the team has stereotypes on their side. Just like with the actor Shia, not a lot of people (and both sexes are being included in this) believe a woman can rape a man. Not only are men considered to be the stronger sex, but the mere idea that a single man would turn down a woman and not be gay tends to be laughed off.

Yet, the case was still going downhill and it all began when Bonnie misspoke in her opening statement. She had said guilty instead of not guilty and earlier in the semester Annalise had warned her class about first impressions. And on that account, Bonnie failed.

And then she went on to make a series of other mistakes. Like not checking into her client for one and so was blindsided when it was revealed in open court that her client used to post fantasies about being with her patient online. That showed the client at least idea of taking advantage of her patient if not following through.

Then there was sexual orientation card. The one Bonnie tried to use as a way to make the plaintiff seem like a habitual liar. As it turns out the plaintiff was gay but his past sexual history is not allowed to be discussed in court. Something he failed to mention and would have helped his case. Yet, the judge in this situation and Amanda Winthrop for that matter stopped Bonnie’s line of questioning when what Bonnie was implying has no bearing on their case.

Meanwhile, as their official case was sinking, Wes and his “friends” were otherwise consumed with what was going on in Professor Keating’s case. It seems that Rebecca was called in and was asked by the police about her association with Nate. Yet, rather than to stick to the plan and act non-committal, she essentially made it out to be that Nate was their killer.

Luckily, the ADA Michaela later schmoozed said his department didn’t really trust Rebecca or her word. But Rebecca had lied to Wes. And after he found out about what she said, he started to look into other things he felt she might have lied about.

For it looks like a few too many people were only looking out for themselves.

Their case took a turn when Oliver helped them hack into their plaintiff’s emails and the entire case was revealed to be part of an insider’s scam. Apparently, the attorney the hospital had hired a lawyer that was supposed to be there if a plea agreement was struck but the hospital hadn’t known their lawyer and the plaintiff were romantically involved or that the lawyer had sent up a bank account offshore for when he and his lover made a new life for themselves. So in the end the hospital didn’t have to pay a thing and all the charges against their nurse was dropped.

And as for Rebecca, that mysterious neighbor she kept changing her story about was ultimately found (by Wes) in a psychiatric facility. It seems that someone had him committed, after he had nearly overdosed by the way, on the very same night Lila Stangard was allegedly killed.

So Wes and Laurel went to visit him. And though he could say much – he said “wet” when he saw a picture of Rebecca.

And as we know, Lila’s body was found in a water tank. Meaning whoever put her there could have been splashed in the process.

But how is Wes going to explain his latest findings to Annalise because he will tell her what he found. And then what will happen. You see the Annalise he’s been seeing all this time, the woman that’s been doubting herself and locking herself away, is now gone. Her mother came for a visit and she helped remind Annalise that sometimes people really do deserve to die.

Such is the case with her late husband with a man she regrettably knew in her childhood that her mother later “dealt” with. So Annalise, the fighter, is back and at the moment she’s helping Nate find a lawyer that could actually help him beat these charges.

And in other words she’s not going to take it too kindly when she finds out what Rebecca almost did to her Nate!