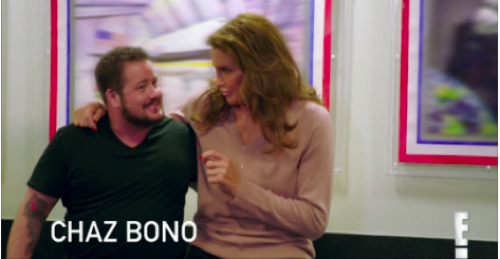 I Am Cait continues tonight an all new Sunday, August 16 season 1 episode 4, called “Family Interference” We’ve got your recap down below! On tonight’s episode, Cait Jenner is invited to her first all-girl sleepover by Candis; and she visits a support group for families with trans kids.

On the last episode, Cait was challenged to break down her walls and got personal on her road trip with her new friends. Did you watch the last episode? If you missed it, we have a full and detailed recap right here for you.

On tonight’s episode as per the E! synopsis “Cait is invited to her first all-girl sleepover by Candis; and she visits a support group for families with trans kids. Also: Kim and Khloé are critical of the comments Cait made about their mother in the Vanity Fair article.”

Tonight is going to be a crazy new series that you won’t want to miss, so be sure to tune in for our live coverage of E!’s “I Am Cait” tonight at 9 PM EST! Meanwhile, while you wait for our recap hit the comments and let us know how excited you are about I Am Cait.

#IamCait begins with her waking at 3 am after waking in a panic from a nightmare about a parking lot swarming with paparazzi. Later, Candis calls Cait up who is online looking at internet posts about her kids. Candis wants to know if Cait is up for a girl’s sleepover. Cait thinks it sounds very little kid, but decides to go for it and says it sounds fun. Courtney comes to check on her hair and says it can’t ever be too big. Cait says Kim Kardashian called and wants to talk because she thinks she’s been bad-mouthing Kris Jenner. Cait says she thought the Vanity Fair article was very fair to Kris.

Cait asks if a tweet would help and Kim agrees. Cait says she would apologize to any family members who think they need it but says no one will come see her. Kim says Cait needs to get the family dynamic going. Cait says she loves the kids and wishes they were all there every damned day. Cait tells Courtney she’s packing for a slumber party. Cait has a negligee that Kris gave her.

Courtney and Cait are in tiaras! OMG! Cait says she and Candis are the only two confirmed and Courtney gives her a look. Cait says to keep her mind out of the gutter. They pick out slumber party lingerie. Cait shows up with her suitcase to Candis Cayne’s apartment. She introduces her to her dogs and pours wine for the two of them. Candis says she’s not sure who will show up.

They have pizza and set outside with the dogs. Candis says it’s important to get out but admits she likes to recluse. Candis and Cait talk about dating and Candis asks what she would say to someone who asked her out. Candis says it’s crazy to be on this journey with Cait and says she likes that she’s really open. They talk about first date outfits. Candis invites Cait to come try on some of her clothes.

Cait is thrilled with her closet and they start looking at outfits. They play dress up for a while. Later, Jen Richards stops by. Cait is excited that Kate Bornstein is with her – she’s an author and advocate for transgenders for more than 30 years. Jen talks about how people have really been open to Cait and have been pouring their hearts out. Kate asks her about the freak factor and says it’s a fact.

Kate says to a lot of the world, they are freaks. Cait doesn’t like that and says she wants to normalize this. Kate says you want to do that because you don’t want to be a freak. Cait agrees that some people will think that especially since Cait went from being a hyper guy to a hyper girl. Cait says it’s important to her how she presents herself to the world and asks how you get past the freak factor.

Kate says to own it with heart and say I’m a freak and I love you. Kate talks about having allies on this journey and asking rather than assuming what each person’s most pressing issue is. Kate then tells her she’s going to go through a new adolescence with this transition. Later, Cait gets into some PJs and Candis tells her she never wears any…

Next day, Cait gets dressed and Candis approves her outfit. They agree it was a fun night and Cait takes off. Cait says they’ve been spending a lot of time together and she’s really nice and they have a lot of fun. She says Candis is a lot of fun and she’s learning a lot. Susan Landon comes to see Cait – she’s been supporting Cait through her transition. Cait talks about family issues. She says it’s hard with the girls and she hasn’t talked to them that much. She says she didn’t want to hurt the kids.

Cait says she texts Khloe and doesn’t get a big response. She says Khloe is made about the VF article and thinks she was getting down on Kris. Susan says there will be a lot of dynamics to work through. Cait says they haven’t seen her other side because they won’t come around. Susan says it will take some of them more time than feels good for her. Susan says with a family this big it will take time and you can’t force acceptance but it’s very painful for her.

Cait goes to Children’s Hospital with Candis. They are meeting a support group of families whose children are having gender identity issues. Cait hopes she can help others while learning something. Chaz Bono is there and they chat. Cait is happy to get to talk to Chaz who has been working with the group for six years. He says he’s seen kids come in experiencing parents who don’t understand.

He says he’s seen so many kids come through this program beautifully. Candis and Cait talk to the kids then go talk to the parents. Cait tells them she’s heard horror stories about parents kicking their kids out and says she’s so impressed with them. Candis says she’s so well-adjusted because her parents were so supportive. One mom says she came there in a panic and being part of this has changed everything. The parents talk about how young their kids knew. Cait thanks them all for talking with her.

Later Cait talks about the strains with Khloe says she doesn’t want that. Cait says she and Khloe have been very close and she’s very opinionated. Cait heads over to try and hash things out with Khloe. She heads over to Khloe’s house and they start with a hug. Khloe loves her purse and she says Donatella Versace sent it to her and it’s not in stores left. Khloe says she and Kendall want to take her to a place to get her lashes extended. Cait tells Khloe she has met so many people lately.

She says she met with Chaz Bono and a group and says there are so many problems. Cait says they haven’t had a chance to talk since she sent the tough texts. Khloe says they weren’t that tough – they just said that Cait shouldn’t be mentioning her mom at all and says Cait should come from a place of more compassion especially since she has two kids with Kris. Cait says she had to hide herself constantly from Kris because she wasn’t accepting at all. Cait says she was sick of hiding.

Cait says she didn’t think it was a hatchet job on Kris and has no issues with her. Khloe thinks it’s a losing battle trying to argue with Cait. She says she and Kris are both happier apart. She says she wishes Kris would call and Khloe says it’s strange them having kids and not communicating. Khloe says Kris and Cait should check in with each other and says she’ll talk to Kris about it. Cait says the kids being a distraction didn’t mean a bad thing but says she meant something different.

Khloe says Kendall and Kylie took it the wrong way and says Kendall won’t vent to her but comes to Khloe who is then in the position of expressing everyone’s position. Khloe says there is some miscommunication because there are so many people in the family. Khloe shows Cait how to set up a group text. Cait says she wants to stay close to Khloe and says she knows this will all take time. Cait says if you can communicate, you can work through anything. Things seem better between them.