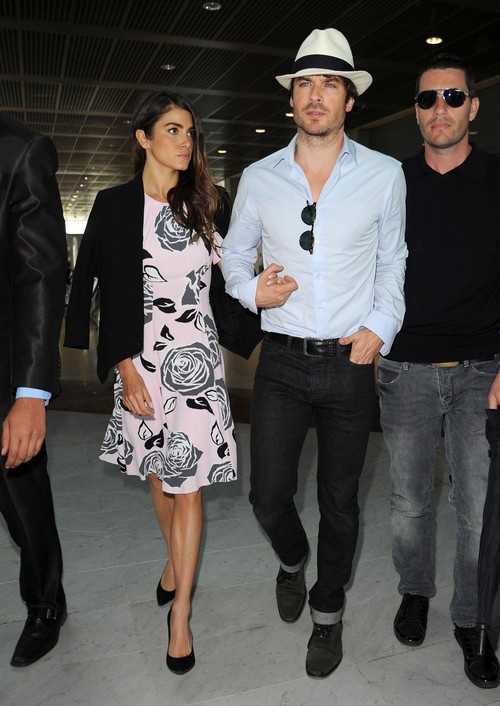 Ian Somerhalder is ready to have children. In fact, ‘The Vampire Diaries’ star wants to have kids now, but his wife, Nikki Reed, is unwilling to sacrifice her career. The divide in their goals are causing Nikki and Ian to fight over their future, which is causing problems behind the scenes of the couple’s seemingly constantly happy relationship.

Nikki and Ian love to fill their social feeds with photos of themselves smiling, appearing incredibly happy together along with messages that support their passion of animal rights. However, there is a topic that is causing a rift in Somerhalder and Reed’s relationship…and it’s not Nina Dobrev.

Ian Somerhalder’s desires to get married and start a family were actually the reason Nina dumped up Ian after dating for a few years. Nina, who is just 26, wasn’t ready for marriage and children. Then, after being friends with both Dobrev and Somerhalder, Nikki Reed stepped in and was ready to commit. Now that Ian is 36 and staring down 40, the TVD star wants to start a family ASAP answering ET’s question about becoming a dad with an emphatic, ““Oh, hell yes! Absolutely!”

There just seems to be one problem with Ian Somerhalder’s baby plans. His wife, Nikki Reed, who is just one year older than Nina, is focused on her career and is even pushing Ian to quit ‘The Vampire Diaries’ to pursue movie roles.

Nikki just landed a part on ‘Sleepy Hollow’ as Betsy Ross – a series regular. There is no way Reed will want to jeopardize her brand new role any time soon. Especially when series co-creator/EP Len Wiseman told THR that he was looking use a vixen for the role saying, “Nikki’s the perfect choice to bring a smart and sexy edge to our show’s twisted version of American icon, Betsy Ross.” A pregnant Betsy Ross wouldn’t be sexy and trying to hide a baby bump while sexualizing the character would be a challenging. Plus, ‘Sleep Hollow’ isn’t shy getting rid of series regulars, cutting 3 major characters by the end of season 2.

Nikki is actually savvy when it comes to navigating Hollywood. Having a baby right now would not be wise for her career, especially after rocketing toward stardom after her ‘Twilight’ success. Even pushing Ian Somerhalder to quit ‘The Vampire Diaries’ is a move toward branding herself. As long as Ian is still on TVD, he will always be known as Nina’s ex-boyfriend and not Nikki’s husband.

What do you think of Ian Somerhalder and Nikki Reed’s baby plans? Will Nikki ever be ready to have a baby? Will Ian quit ‘The Vampire Diaries’? Let us know your thoughts in the comment section below.