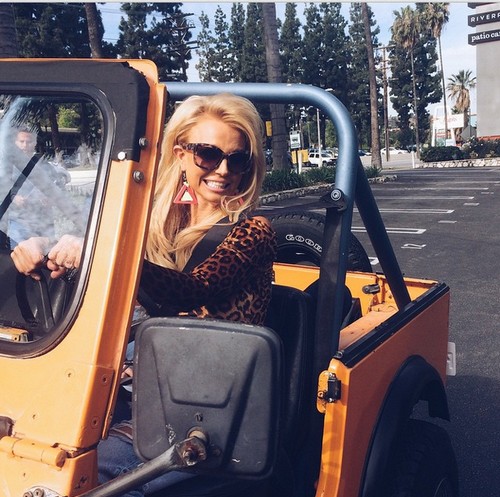 Iggy Azalea and Britney Spears are teaming up on a new music video! Princess of pop music, Britney Spears, may be 33-years-old but she has no plans of retiring her crown any time soon. The “Oops I Did It Again,” singer was just spotted driving a bright yellow Jeep for her brand new music video “Pretty Girls.” The song will appear on Britney’s new album.

“Pretty Girls,” will feature Australian rapper Iggy Azalea. Iggy has been under a lot of pressure lately, after she was scorched by Azealia Banks in a recent interview. Azealia Banks said “Don’t put her in hip-hop. Just because she’s not singing does not mean it’s rap music…Y’all owe me the right to my identity. That’s all we’re holding on to in hip-hop and rap.” Ever since then, Iggy has been struggling to maintain her credibility as a rapper. She has been called out by fans countless of times, accusing her of not writing her own music, and for “free-styling,” a song from her album when giving a radio performance.

Despite all of the criticism, Iggy Azalea has proved that she will not let a few opinions stop her from making music. Teaming up with Britney Spears is certainly a good look for the young rapper.

Britney took to Instagram to post the photo above with the caption “Girls roll up, windows roll down, eyes on us, jaws on the ground,” which we can assume are lyrics from the “Pretty Girls.”

This will also be Iggy Azalea’s first job as a director, as she is directing the entire music video! That’s pretty neat. Iggy tells Access Hollywood, “I’m gonna be co-directing the video next week..So that’s been awesome, not only just getting to work with Britney and write the song, but being able to have something to do with the visual…It’s just been an honor that she would let me do that for her, so I’m super excited.”

The single drops on May 5 and there is so much excitement surrounding it’s release. Let the countdown begin! Are you a die-hard Britney Spears fan who’s ready for some new music, or is the fact that Iggy Azalea is a featured artist on the song enough to turn you off from the record?