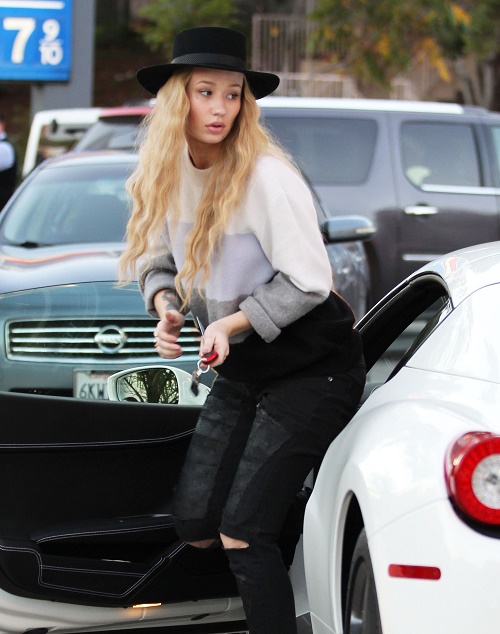 Iggy Azalea is single and ready to mingle! The female rapper and “Black Widow” songstress has been in a longterm relationship with NBA star Nick Young for years, and the couple even fired up marriage rumors in 2014 when they bought an LA mansion together – Nick even stood by Iggy’s side when her ex was suing her and threatening to leak her sex tape. But, according to a new report in OK! Magazine, Iggy and Nick Young are broken up, and she kicked her cheating boyfriend to the curb.

The February 9th edition of OK! Magazine reveals, “Rapper Iggy Izalea is furious since her L.A. Lakers boyfriend was snapped on January 9th with his arm around a mystery brunette as they headed in to a private home after partying all night at Hollywood hotspot Hooray Henry’s. To make matters worse, the car they exited – a blue 1962 Chevy Impala – was Iggy’s Christmas gift to Nick in 2013.”

The photos of Nick Young and the mystery woman really don’t leave much to the imagination. We can’t imagine how he would explain to Iggy being photographed getting out of his own car in the middle of the night and heading into another woman’s home. According to OK! Magazine’s sources, Iggy wasn’t entertaining any ridiculous explanations the athlete had and she promptly kicked him out. The snitch told OK!, “Iggy threw him out when she saw the pics. The fact that he let some other girl drive that car was salt on the wound. She’s lost all trust for him.”

Although Nick nor Iggy haven’t actually publicly confirmed or denied their break-up or the cheating scandal, it is safe to say that the female rapper will receive a lot of backlash from her fans after proclaiming herself a “Black Widow.” Call us crazy, but “Black Widows” don’t forgive their boyfriends for cheating on them. Do you think there is a logical explanation? Or was Nick definitely cheating? Will Iggy take him back? Let us know what you think in the comments below!