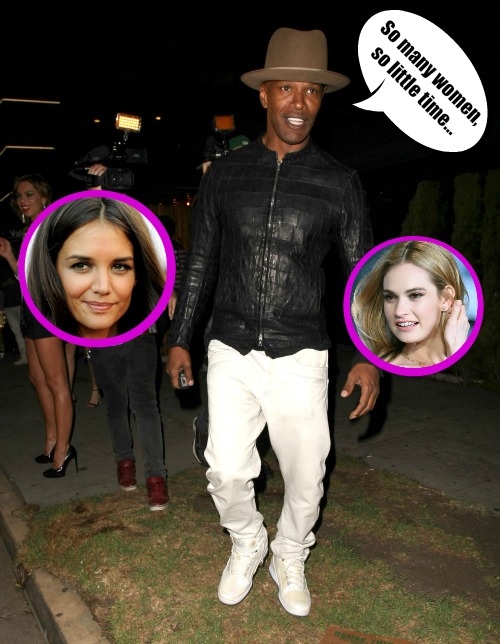 Is Jamie Foxx trying to cheat on Katie Holmes? Jamie Foxx is currently on location filming his new movie “Baby Driver” with his beautiful co-star Lily James. Apparently, we aren’t the only ones who think that Lily James is beautiful – Jamie has noticed too and has been reportedly flirting up a storm with her. According to a new report, there is only one problem – Lily doesn’t feel the same way and is starting to think that Jamie is “creepy.”

This week’s edition of OK! Magazine reveals that Jamie Foxx (who is supposed to be in a very serious and super secret relationship with Katie Holmes), has been making Lily feel uncomfortable on the set of “Baby Driver.” An insider on the set dished to OK! Magazine, “Jamie’s really into Lily. It’s clear she doesn’t enjoy his flirting, but he’s oblivious.” They went on to say that Jamie is constantly telling James how “beautiful” she is. Jamie’s flirting is reportedly becoming “too much for Lily to handle,” and she desperately wants the veteran actor to just start actin professional.

Jamie Foxx and Katie Holmes have been maintaining a VERY low-key relationship for over a year now, and over the summer tabloids were reporting that Katie was basically living at Jamie’s house. So, one of these stories is wrong, or Jamie Foxx is up to no good. Either Katie and Jamie have broken up. Or, Jamie is NOT flirting with Lily James. Or the third possibility – both of these stories are very true, and Katie better reel in her boyfriend Jamie.

What do you guys think? Should Katie Holmes be worried about what Foxx is up to on the set with Lily James? Or do you think that the magazine’s insiders may have been exaggerating a bit about Jamie’s flirting problem? Share your thoughts in the comments below!