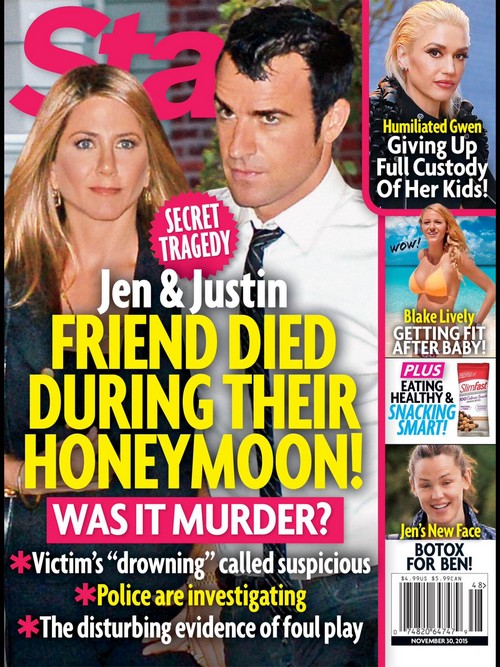 Jennifer Aniston and Justin Theroux celebrated their August wedding with a trip to Bora Bora and it was perfect until their friend Carmel Musgrove died in what some are calling a murder. Carmel was alive when Jennifer and Justin left the French Polynesian resort but that doesn’t make the “Cake” star feel any less horrible.

The day after Jennifer and Justin were finally married in a backyard ceremony in August, the newlyweds and some of their closest celebrity friends jetted to the Four Seasons Resort in Bora Bora to celebrate their happy union.

Courtney Cox is Aniston’s longtime friend and served as her maid of honor, so she was definitely at the star studded vacation resort. Also on the trip were Chelsea Handler, Jason Bateman, Jimmy Kimmel, producer Joel Silver and a few other A-listers that are in Aniston and Theroux’s inner circle.

Also along for the trip was Joel Silver’s longtime assistant Carmel Musgrove. The 28-year old aspiring producer was also a friend of the newly married couple and she didn’t survive her trip to Bora Bora.

Carmel went missing on August 19 after telling other guests that she was going for a swim. Musgrove’s body was found the next day. According to Star magazine, Carmel was found naked about 400 yards down the beach from where she was staying.

Carmel’s death was quickly and quietly declared an accidental drowning after a brief investigation by local authorities. Carmel’s family wasn’t so sure about the accidental part. They flew to Bora Bora and started looking into the investigation into themselves.

Musgroves family asked Dr. Michael Baden to perform a second autopsy and the findings are blowing the lid open on some Hollywood secrets that Jennifer Aniston and her friends are really trying to keep under wraps.

Dr. Baden’s autopsy revealed that Carmel Musgrove had marijuana, alcohol and cocaine in her system at the time of her death. There are also some questionable and unexplained abrasions on Musgrove’s body according to the report.

It’s enough to raise some questions about whether or not there was foul play at the Four Seasons Resort in the days after Jennifer Aniston’s long awaited wedding.

Jennifer and Justin had nothing to do with Carmel’s death. The newlyweds were long gone when the aspiring producer went missing. Jennifer allegedly still feels devastated by Carmel’s death and feels like her whole honeymoon is ruined because of the tragedy.

Star reports that Aniston is also really worried that the private investigation into Musgrove’s death is going to put her life under a microscope and reveal some secrets that everyone at the party would probably rather not have exposed.

For starters, if Musgrove had been partying with cocaine and marijuana on the night that she died, where did she get it? Bora Bora is small and very safe. It would be hard to get drugs on the island and if they were flown in with the party guests, how did they pull that off?

Now authorities are taking a harder look at what really went down during Jennifer and Justin’s honeymoon trip. They want to know how the illegal drugs got to Bora Bora and who is responsible for allowing them through.

Now thanks to the tragic and very badly timed death of Carmel, the rest of the honeymoon vacationers are looking to have some of their deepest secrets exposed and Jennifer Aniston is really upset about it. According to Star, Jennifer’s publicist, Stephen Huvane says Jen and Justin had left Bora Bora before Carmel died.