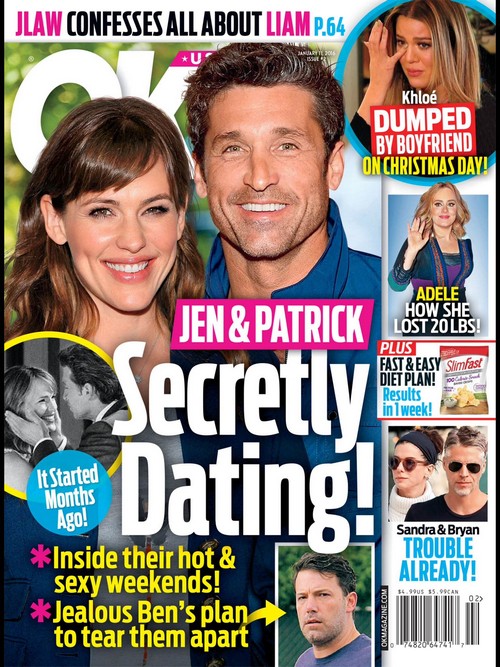 Is Jennifer Garner dating Patrick Dempsey? Maybe Jen met Patrick to ask for advice about her divorce from Ben Affleck. Dempsey knows a little something about divorce – the actor and Jill Fink have called it quits after 16 years of marriage.

Did Jennifer ring Patrick up and ask the former “Grey’s Anatomy” star to meet for coffee a few months ago? OK! sources claim Jen and McDreamy wanted to cry on each other’s shoulders about the mutually difficult breakups each is experiencing.

Allegedly Jennifer Garner and Patrick Dempsey became great friends and had “great chemistry” while filming the 2010 movie “Valentine’s Day.” And now the former co-stars are supposedly confiding in each other – and possibly dating.

This coffee meeting must have been fairly exciting! The insider divulged that the moment Jen and Patrick started talking the sparks were flying. According to the source, Jennifer “was secretly wondering if the electricity was still there.”

This thrilling commiseration over coffee reportedly was “followed up with a dinner date” and said dinner date lasted an entire weekend. The insider claims this new romance is the real deal – it is not a fling. Jennifer and Patrick began secretly dating for a few months.

However, Patrick and estranged wife Jill were spotted snapping selfies and holding hands in Paris in November. It certainly appeared as if Dempsey and Fink were attempting a reunion. Patrick didn’t look like a man in love with another woman. The source alleges that Patrick is torn between Jennifer and Jill.

Ben Affleck and Jennifer Garner may have tried to reunite in November as well. The couple reportedly spent Thanksgiving with Ben’s mom and the couple’s three children. Jennifer and Ben may have been together for Christmas – with the kids – also. Spending two major holidays together could signal a reunion Is forthcoming.

Jennifer Garner dating Patrick Dempsey – that’s an interesting couple if the report is true. Garner and Dempsey may have met for coffee. The two may have discussed marital problems, counseling options, how to raise children as divorced parents.

There haven’t been any photos of Jen and Patrick together – but McDreamy has been in London filming “Bridget Jones’s Baby.” Did Patrick sneak back stateside for the coffee talk and weekend long dinner date? Or did Jennifer dash off to London?