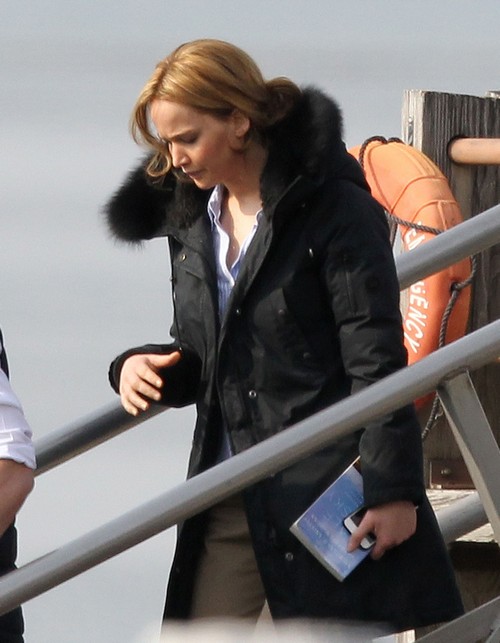 So much for Jennifer Lawrence and Chris Martin breaking up, right? According to several reports [and photos], Jennifer and Chris are still going strong and were even spotted together at the private Teterboro Airport in New Jersey on Sunday, April 5. Plus, the two reportedly spent the entire day together before that, with a source telling Page Six that the two lovebirds shared a meal at Central Park’s Tavern on The Green Restaurant.

In fact, the source also added, “Jennifer arrived first and waited in her car for a bit, then went to the table and sat with her bodyguard until Chris arrived. They were talking softly to each other throughout the meal. As they left, she changed shoes and her sweater, and she was overheard telling him she wanted to take a walk through Strawberry Fields, and they left holding hands.”

Gwyneth Paltrow is probably seething right now, especially since all her efforts to hook up Chris Martin and Kate Hudson have clearly failed. Jennifer has been filming ‘Joy’ in Boston for the past few months, so that’s probably how she’s managed to escape paparazzi notice for so long. Everyone just assumed that she had broken up with Chris Martin, because – let’s face it – it’s Chris Martin. We had heard over and over again that Jennifer wasn’t comfortable with Chris’ proximity to his ex-wife, Gwyneth Paltrow, but clearly that’s not the case. I mean, Gwyneth and Chris just went on a private couple’s holiday to Mexico, but Jennifer and Chris are still dating? That doesn’t sound like a jealous girlfriend to me, although I’m sure Gwyneth is the jealous one in this situation.

What do you guys think about Jennifer Lawrence and Chris Martin still dating? Should they be commended on their relationship actually lasting? Let us know your thoughts in the comments below.

Jennifer Lawrence carefully walks down a gang plank at a marina to film a sailboat scene for ‘Joy’ on April 6, 2015 along the North shore of Massachusetts. Jennifer carried with her some reading material, a book called “Half the Sky: Turning Oppression into Opportunity for Women Worldwide.” Yesterday Jennifer was spotted publicly with Chris Martin for the first time since January, as they boarded a private jet together. How did Jennifer feel about Chris going on a Mexican holiday with his ex wife Gwyneth Paltrow and their kids? FameFlynet