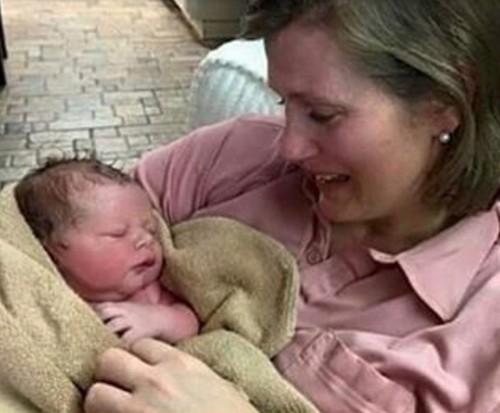 Jessa Duggar Seewald introduced the world to her brand new baby boy on Friday and fans are wondering what is up with the ugly brown towel wrapped around her newborn?

Jessa originally planned a homebirth for the newest addition to the Duggar clan but her plans were interrupted by an unknown medical emergency.

Seewald was transported by ambulance to a Fayetteville, Arkansas hospital to deliver the whopping 9 lb. 11 ounce boy.

After hearing of Jessa’s failed homebirth, fans are obviously glad that Jessa and her baby boy are doing well. There has been some confusion about the obviously old brown towel that debuted in the newest Duggar baby’s first photo. Where did it come from and why didn’t Jessa Duggar Seewald put something cuter and more comfortable on her baby?

Most hospitals have a protocol for swaddling babies in specific linens and for the most part, those newborn receiving blankets have always been white with blue and pink stripes on them. So where did the towel come from and why did they opt to announce the arrival of Jessa’s baby in such an icky looking brown towel?

Most adults wouldn’t want to dry off with a towel like the one Jessa Duggar Seewald’s baby was wrapped in. Didn’t they have something else to cover their baby up with? Or is the ambulance ride story not all true? It would make sense that the baby boy, whose name has still not been revealed, might not be seen in hospital gear if he was indeed born at home.

However, baby Seewald was born in the hospital according to multiple reports. It only stands to reason that Jessa and her newborn have not gone home yet. Did they pack up the ratty thing and bring it to the hospital with them?

The Duggars aren’t anywhere near poor even though their family and their childrens’ families tend to live on the modest side. That said, they certainly could spring for a few soft baby blankets and maybe even a cute outfit to put on the brand new baby for his introduction to the world. Maybe fans of the Duggars can pitch in and get that baby some decent receiving blankets as a gift for the brand new addition?