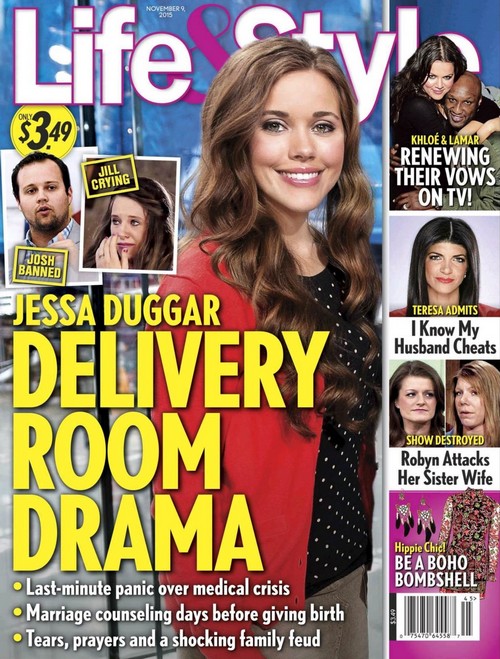 Jill Duggar has fled to Central America leaving her pregnant sister Jessa Duggar alone and scared as her November 1 due date approaches. Jessa is petrified that she’ll endure the same grueling birth experience Jill did and had been counting on her sister to be there for her every step of the way.

At least the expectant mother can find solace in the fact that older brother Josh Duggar has been banned from leaving his rehab program.

Even though Jessa Seewald has posted photos on Instagram of happy days filled with pumpkin-spice delicacies and pedicures, an insider revealed to Life & Style that the 22-year-old mom-to-be is distraught because she feels she’s been abandoned by older sister Jill Dillard who flew off for serve the Lord with more missionary work in mid-October.

To add insult to injury Jill Duggar informed the family that it will be many months before she, hubby Derick Dillard and baby Israel will return to the United States.

Jessa Duggar had been counting on Jill Dillard to be there for her during the birth of her first baby. Just like her sister, Jessa has planned a home birth and Jill Duggar is now a certified midwife with plenty of knowledge and training to get Seewald through the delivery.

Now Jessa Seewald feels as though her sister has deserted her just when she needs her the most. An insider revealed that Jessa misses having her Jill Duggar around because they lean on each other for support.

The Duggar women believe in home births but Jessa is very scared about the situation after watching her sister go through 70 grueling hours of labor before she was forced to go to the hospital for an emergency cesarean section on April 6.

And Jessa Duggar does not want a cesarean section – she considers it a last resort. Without Jill by her side to coach her will Jessa rethink her decision and have her baby in the hospital?

At least Jessa won’t have to worry about her molester brother Josh Duggar being around. He’s holed up at the faith-based Reformers Unanimous treatment center in Illinois and can’t leave. Even though Jill Dillard has fled to Central America to do more missionary work – how nice of her to leave her younger sister in the lurch – won’t Jessa Duggar have the support of her mother Michelle Duggar and older sister Jana Duggar when she has her baby?