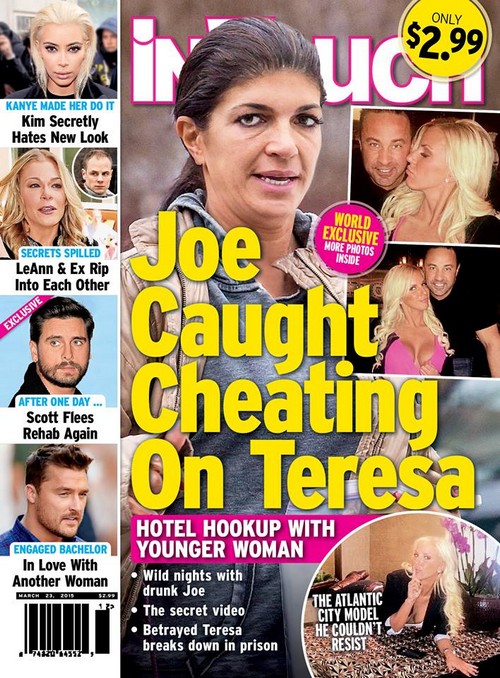 Joe Giudice was caught cheating on Teresa Giudice Teresa who will now file for divorce – and there is photo proof of Joe’s infidelity. Giudice and Joe Giudice are still together, defying all logic and common sense. For whatever reason, Teresa Giudice refused to divorce Joe Giudice before getting convicted for fraud, and now it’s too late. She knows that divorcing Joe from prison would likely do more harm than good, especially since he has all the power to spin the divorce however he wants to spin it.

But with that being said, now Teresa Giudice will have to face the humiliation of Joe Giudice cheating on her. It was already widely suspected that Joe was stepping out on Teresa even before Teresa ended up in prison, but according to the latest cover issue of In Touch Weekly, there is now picture proof supporting Joe’s cheating. There are pictures of an Atlantic City model cozying up to Joe, with secret videos detailing their ‘wild nights’ together.

So basically, Joe has been getting drunk and partying with models in Atlantic City while Teresa Giudice rots away in prison for HIS mistake. Sure, she was involved in the fraud as well, but let’s be real – does anyone truly believe that she has the brains to be a criminal mastermind, even on a white collar level?

Of course, Teresa Giudice is breaking down in prison and will attempt to file for divorce. She may even have lawyers getting the divorce finalized, and she might use her connections to get Joe deported after he serves prison time. But if we’re being realistic, Teresa is all talk, and always has been. She’ll throw around the idea of divorce right now, but the minute Joe promises her something, she’ll back down and go back into her hiding hole.

What do you guys think of Joe Giudice’s affair with some random Atlantic City model, and Teresa Giudice breaking down in prison over Joe’s cheating? Do you think she’ll really file for divorce, or will she just ignore the situation? Let us know your thoughts in the comments below.