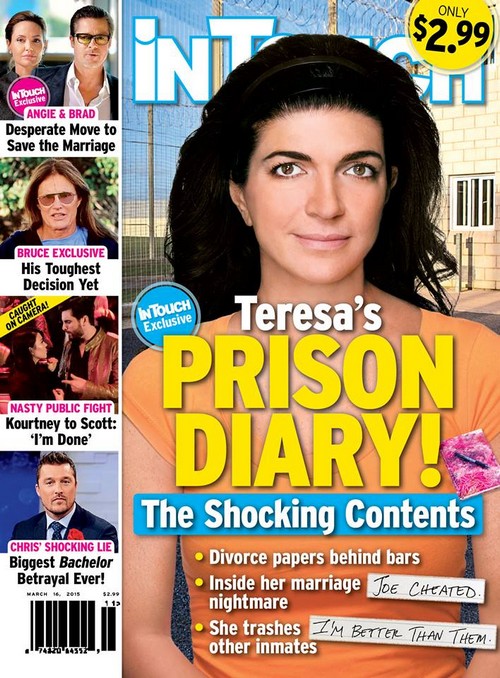 Teresa Giuidice is getting a divorce from cheating husband Joe Giudice while she experiences prison hell – all as expressed in her diary. Teresa Giudice is having a field day at prison… not. The latest cover issue of In Touch Weekly has an interesting [and by interesting, I mean nightmare-inducing and photoshopped] photo of her, accompanied by a story about Teresa’s ‘prison diary’. In my mind, Teresa Giudice’s ‘prison diary’ is filled with endless whining about how she’s stuck in this horrible situation because of her idiot husband, and believe it or not, In Touch’s sources agree.

For one thing, In Touch’s cover claims that Teresa Giudice and Joe Giudice are [finally] getting a divorce, which has been years coming, if you ask me. The sources claim that Teresa Giudice’s final straw was when she found out that Joe cheated while she wallowed away in prison, but I have a feeling she knew about Joe’s cheating even before that. But what is she going to do? Call him out on the cheating when she was in the midst of fighting a fraud case that she knew next to nothing about?

Plus, Teresa is also reportedly ‘trashing’ other inmates, and constantly pointing out how she’s better than them. We already know that Teresa Giudice is incredibly insecure and also worried about her future, and since she’s so used to trashing her cast mates on The Real Housewives of New Jersey, she’s just transferred that.. verve to prison.

In Touch also has several other stories, including one about how Kourtney Kardashian is completely and utterly done with Scott Disick after his constant drinking, partying, and cheating. There’s also a feature on Bruce Jenner and his decision to complete his sex change, and whether he should go through with it in the wake of the fatal car crash that he was involved in. And finally – Brad Pitt and Angelina Jolie are supposedly trying desperately to ‘save their marriage’, because apparently, they’re old and fighting.

What do you guys think? Will Joe Giudice and Teresa Giudice get a divorce while Teresa’s in prison – especially after going through so much together? Let us know your thoughts in the comments below.