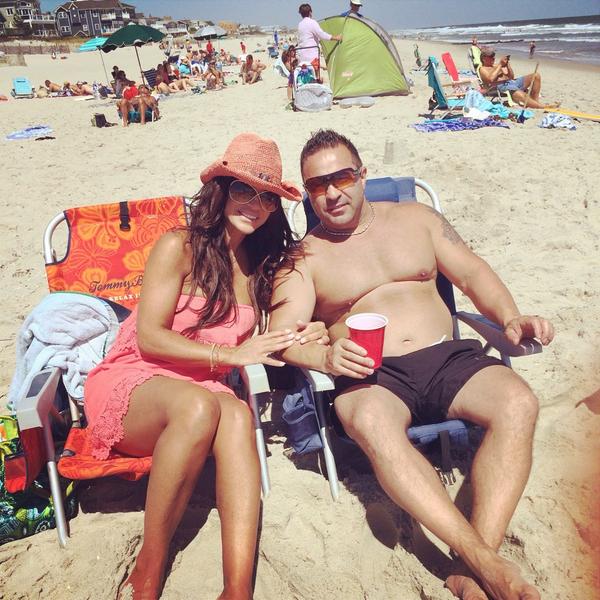 Teresa Giudice being fired from Real Housewives of New Jersey would not come as a shock to anyone, except Teresa maybe, and neither would a divorce from guilty criminal husband Joe Giudice! The divorce and fired clocks are ticking the days away until her prison sentencing in September, which will no doubt be covered in detail on The Real Housewives of New Jersey. There’s little chance of Teresa staying on the show after her sentencing, especially if she’s given prison time, but sources close to Teresa say she’s divorcing her husband, Joe Giudice, either way.

According to the sources, Teresa blames Joe for the situation she’s in right now, and she’s planning on reiterating that during her sentencing. She wants everybody to know that it was Joe who was behind all their illegal activity, including the tax fraud. She thinks that by divorcing Joe and blaming the whole situation on him, she’ll engender some sympathy from the judge and jury. She also thinks that she’ll escape prison time because the judge will take pity on her – ostensibly, because she’s the mother of four young children.

To be honest, I don’t think Teresa understands how sentencing hearings usually work. She may get some sympathy during the case, especially if she makes it seem like Joe was the mastermind behind the whole plan [which he was], but that’s going to impact her sentencing in a very minimal way. Whatever she does, she’s not going to be able to escape the sentencing, whether it’s jail time or no jail time. At the very least, she’ll have to pay a massive fine, which will cut into her already dwindling savings. And if she does get fired from The Real Housewives of New Jersey, she’ll be out on the street with no money soon enough. A divorce isn’t going to help matters enormously, but Teresa’s reportedly determined to try. At the very least, the divorce will help her cut herself off from her skeevy husband, who will definitely have a harsher sentence than her. One thing we can say is that Juicy Joe is now Guilty Joe!

What do you guys think? Should Teresa divorce Joe? Let us know your thoughts in the comments below.