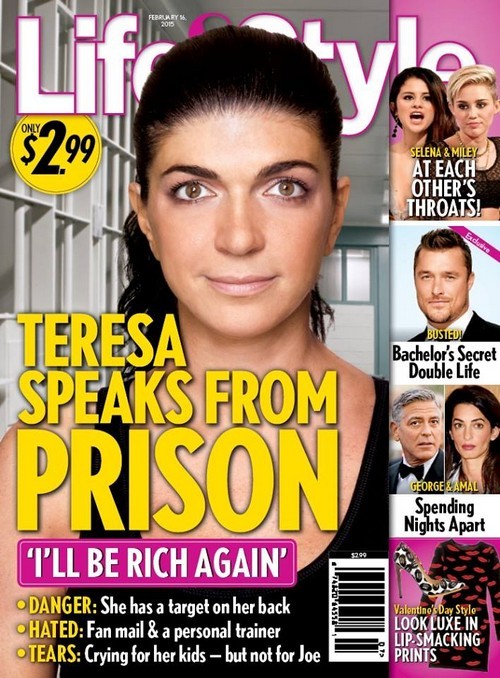 Teresa Giudice is breaking up with Joe Giudice and filing for divorce right after she completes her prison sentence. Teresa Giudice covers the latest issue of Life & Style Magazine in a blatant attempt to elicit sympathy, but she should know that the sympathy train has sailed a long, long time ago. Teresa might have had a shot if she divorced Joe Giudice the minute the fraud charges were brought to the table, but by sticking with her no-good husband, she’s done nothing but derail her own image. Now, she’s stuck in prison for fifteen months with no friends and no family by her side, no job prospects, and no money. And NOW rumor has it that she wants to divorce Joe the minute she gets out of prison, but what good will that do?

According to Life & Style, Teresa Giudice is determined to earn back her pre-fraud and pre-prison life, telling people that she’ll ‘be rich again’. Is that her only goal? Shouldn’t she care about rehabilitating her image, helping her kids, or living a life away from the reality TV madness that led to her incarceration in the first place? The report even claims that Teresa is ‘crying for her kids’, but ‘not for Joe’ – even still, I have trouble believing them if her biggest goal is to get rich again. Even if Teresa does breakup with and divorce Joe Giudice the minute she gets out of prison, it’ll definitely be much too little, much too late – especially since The Real Housewives of New Jersey has more or less moved on without her.

Life & Style also has a story about how Miley Cyrus and Selena Gomez are constantly at each other’s throats, largely centered around their shared Justin Bieber connection. Plus, I think that Miley doesn’t like how hypocritical and two-faced Selena can get, and Selena can’t stand how openly crazy Miley gets.

There’s also a story about how George Clooney and Amal Alamuddin are ‘spending nights apart’, which we predicted weeks ago. George and Amal are already at high-risk for a divorce, simply by the nature of their jobs and high-profile status, but that will increase ten-fold when you consider how often they are apart for their careers.