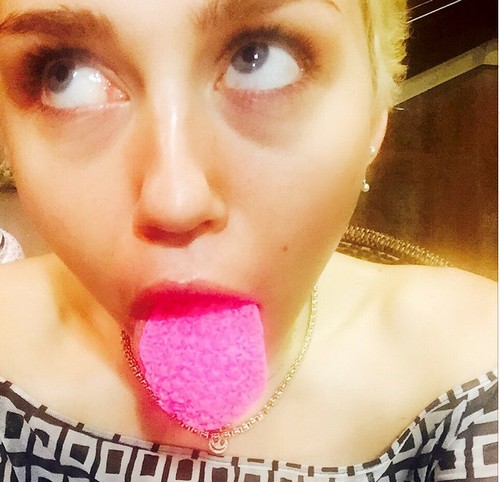 Miley Cyrus and Selena Gomez have a very antagonistic relationship, even though they try to keep it on simmer whenever they’re at the same public events. However, Miley’s always used Twitter as a method to indirectly diss Selena, and she’s definitely continuing that trend. Her most recent diss was posing a hot bikini selfie – very reminiscent of Selena’s most recent selfie – and captioning it with, “Do yiew tink if I push muah titties up I’ll get mo followahhhzzzz? #shouldigrowmyhairout?#koomkoomquah @derrellbullock @twinkleswinkle@adamleber @anderssonjj @chelseahandler@baddiewinkle.”

Um yeah, I think we all knew who she was referring to and who she was mocking, right? I mean, Miley Cyrus and Justin Bieber are supposedly BFFs and/or have hooked up in the past, so I think it’s fairly clear that Selena and Miley don’t have the fondest feelings for each other.

But even though one would assume that Miley and Selena have moved on, especially with Selena no longer dating Justin Bieber, it looks like that’s not the case. Miley posted yet another Twitter diss the other day, writing, “Bunz out. Weiner. But I gotta keep my eye for Selener.” – @NICKIMINAJ (that is a direct quote).”

Yes, this is a quote from Justin’s song with Nicki Minaj, ‘Beauty and a Beat’, but why make it a point to write ‘direct quote’? Or better yet, why write this caption at all? Anyone who’s even remotely familiar with Miley’s and Selena’s relationship will know that Miley Cyrus was clearly dissing her arch-nemesis. Miley’s not one to keep her feelings in, so her Twitter comments and captions are never just random comments – they always have a meaning behind them.

Of course, Selena won’t respond directly, but she’ll figure her own way of fighting back – probably involving recruiting Taylor Swift and having her write a song about Miley.

What do you guys think about Selena Gomez’s feud with Miley Cyrus? And do you think Miley will keep dissing Selena on social media? Let us know your thoughts in the comments below.