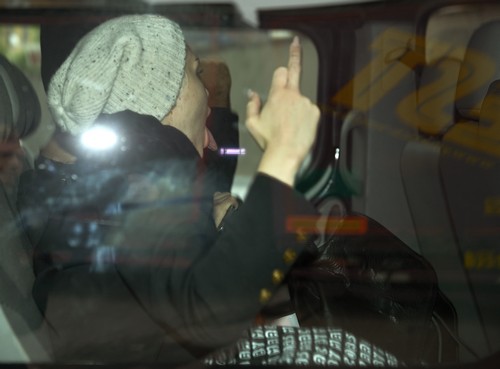 Miley Cyrus and Selena Gomez have never really been friends, despite both having grown up in the Disney machine and starring in popular television shows around the same time. There always seemed to be an underlying tension between them, and a large part of that tension was rumored to revolve around Justin Bieber. Plus, Selena always came off as the Disney princess whereas Miley, as we know, went off the rails pretty quickly. That being said, Selena’s position is a lot more precarious than Miley’s right now, and we imagine that the two aren’t particularly fond of each other either way.

We’ve heard from sources that Miley considers Selena a spoiled brat who thinks she’s better than other people, and Selena thinks that Miley is out of control. Clearly, Miley’s feelings regarding Selena are more vitriolic, especially since she recently used her concert to diss Selena in a VERY public manner. She held up a cardboard cutout of Selena’s face and sang her song ‘FU’ at the same time, letting the whole world know what she feels about her former Disney compatriot.

Miley’s already denied that there’s any feud between them, but her actions don’t represent her words, do they? Honestly, we’ve been hearing that the biggest reason for the problems between Miley and Selena always centered around Justin Bieber. Selena, as we know, was dating Justin in an on-again/off-again relationship last year. Miley ‘hung out’ with Justin for a while last summer, leading to Selena getting extremely jealous. The two may have exchanged words, but all we know is that they’re not on good terms with each other.

Seriously, the fact that Justin had this kind of sway on two huge celebrities makes me wonder what kind of crack they must be smoking to buy into his BS. Either way, it’ll be interesting to see how Selena responds – if she even deigns to respond. Let’s not forget that Selena was banging the Biebs this weekend in Canada! Let’s be serious here – Justin goes for pretty girls so Miley can forget about it anyway – with or without Selena in the picture.