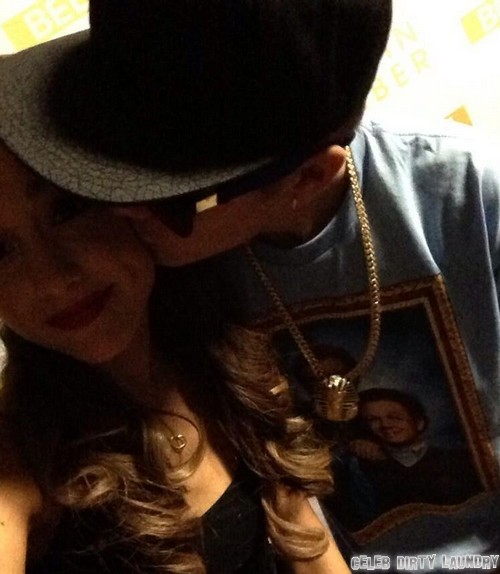 Guess her mouth must have written a check her backside couldn’t cash. How better to explain Ariana Grande‘s backpedaling her way right out of a new celebrity feud. In case you missed it, Ariana Grande was one of the acts that went up onstage after the epic failure and vulgar F-Bomb of Selena Gomez‘s performance. She experienced the same technical problems but was able to give by all accounts an amazing performance without any of the ugly sulking drama that Selena provided.

The trouble however began after she finished her set; she made the throwaway comment “At least you know I wasn’t singing to a track.” The somewhat snide remark obviously looked like she was accusing someone else of lip-syncing leading everyone to think she was throwing shade at Selena Gomez. Selena was lip-synching and doing a horrid job of it – she frequently forgot to have the mike to her mouth while ‘singing’ – and lips were not in sync with the song that was playing – what a joke.  You can see her poor performance and her F-Bomb in the videos below.

As Hollywood Life pointed out, Ariana is very much a newcomer to the stage. They feel it was a youthful mistake while I believe she was quick enough to realize – but a “feud” could up her profile. You see she was a child star (just like Selena) and must have worked in the business for a while. When the rest of the world that happens not to watch Nickelodeon heard about her it was becuase she was dating Nathan Sykes and that she was buddy buddy with Justin Bieber. This girl isn’t dumb. She knows how to get ahead and what captures headlines. But then she took to Twitter to apologize to Selena.

Ariana claimed she was cracking joke to cover for her mic problems and nothing more. Also she was sorry if her statement was taken the wrong way. That’s all very nice yet it wasn’t particularly necessary. She could have been told to apologize. Think about it. If she know Justin was going to support her and her actions then no one would say sorry to Selena.

No, Ariana wasn’t being mature when she explained herself. She was making sure she was still on Justin’s good side. She never knows if he’ll get back together with Selena and so played it safe. Smart Girl!