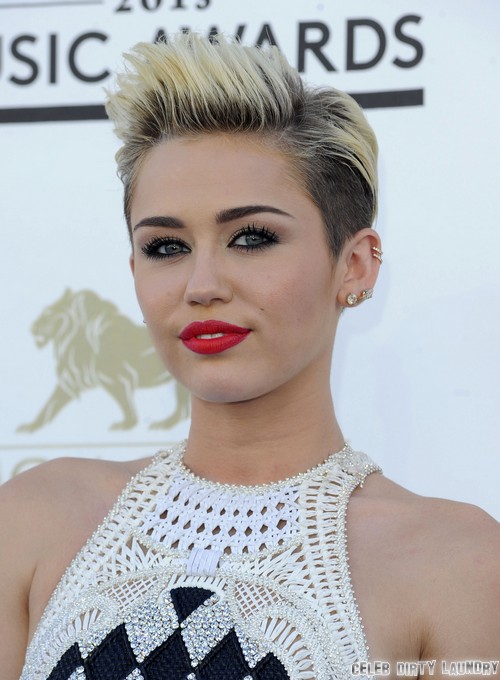 Breaking news Celeb Dirty Laundry readers! Justin Bieber and Miley Cyrus did some heavy flirting over the weekend! Bieber and Cyrus visited the Beacher’s Madhouse at the Roosevelt Hotel in Los Angeles, and left the celebrity hotspot – together – at 2 AM early Sunday morning. Cyrus, a regular at this hangout, arrived first, but was joined by Bieber shortly thereafter. It is unclear where they went post-flirt.

Hours before their meet-up, Bieber’s leopard print Audi was spotted leaving Cyrus’ residence. According to TMZ, the two have been best friends for a while, but we know that anything is possible in La-La-Hollywood Land.

Bieber’s flirtatious past destroyed his boy-band-sad-eye-image. After his little stint with that Victoria’s Secret girl (what’s her name again?), his playa rep skyrocketed. (Selena Gomez cried in the wind, Bieber smoked weed, and it all came crashing down.) Bieber is infamous for his rule breaking, above-the-law attitude, so stealing another man’s woman wouldn’t really register in his immature mind. We highly doubt Bieber and Cyrus are getting it on like Barry White and Donkey Kong, but there’s always the possibility that this “innocent” news story could spiral out of control.

Cyrus, on the other hand, built her career on healthy morals and awwshucksBillyRayCyrus. Her ghastly Hannah Montana legacy forced fans to stick to her forever and ever and ever. She continues to re-invent herself without becoming a caricature (Amanda Bynes, anyone?), which, in turn, satiates her fans. It’s a perfect balance.

What do you think? Do you think Justin Bieber and Miley Cyrus are in it to win it? Do you think Cyrus would take this route with Bieber? Are they just BFFs? Or are they BF/GF on the sly? We’d like to hear from you, so comment below and let us know your thoughts!