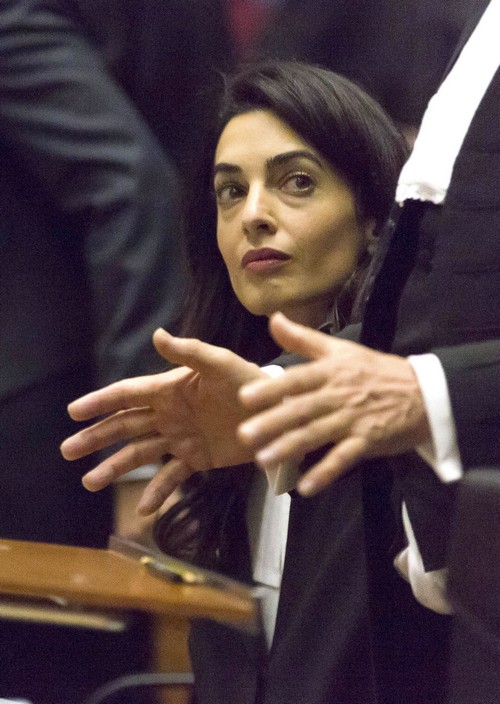 George Clooney and Amal Alamuddin have been married less than six months, but the divorce rumors have already started picking up speed. However, while the majority of the rumors seem centered around George Clooney cheating, flirting with other women, or having affairs, the real reason for trouble in paradise is miles away from the typical tabloid gossip.

If we’re being brutally honest, how many celebrity couples – especially long-distance celebrity couples – make the distance? We can literally count them on one hand, and that’s not even counting the statistics for Hollywood A-listers. Plus, George Clooney has already been married once and he couldn’t make it work, so what makes anybody think that he and Amal Alamuddin are going to last? It was always obvious that he wanted an intelligent wife, but the way Amal is being paraded around Hollywood points more to her being a showpiece wife than anything else. She’s there for show and tell, not for doing anything substantial. I mean, George does fancy himself this big political hotshot, but apart from fundraising George is a big zero when it comes to political clout – really, the best political connection he has is probably his wife.

And of course, Amal Alamuddin is a hotshot UN lawyer that hasn’t even come close to reaching the pinnacle of her career yet, which means that she’s not going to stick around LA to attend parties all year. Sure, she stopped by the Golden Globe Awards (those sad, sad gloves…) and will likely make an appearance at the Oscars, but she’s already prepping for the next big case – and that’s not even counting everything that’s on her plate for the next year.

Either way, Amal isn’t going to be lounging in LA or Lake Como for the majority of the year – she’s going to be in London or traveling around the world for her career. And George? Well, unless he wants to trail his wife and become her showpiece husband, there’s little chance that these two are going to spend the next few years together, in the literal sense of the word. And then George is going to want a baby, but Amal isn’t going to stop her career to give George everything he wants – especially not at the expense of her desires.

So at the end of the day, a divorce just seems like a natural progression, no? What do you guys think? Let us know your thoughts in the comments below.