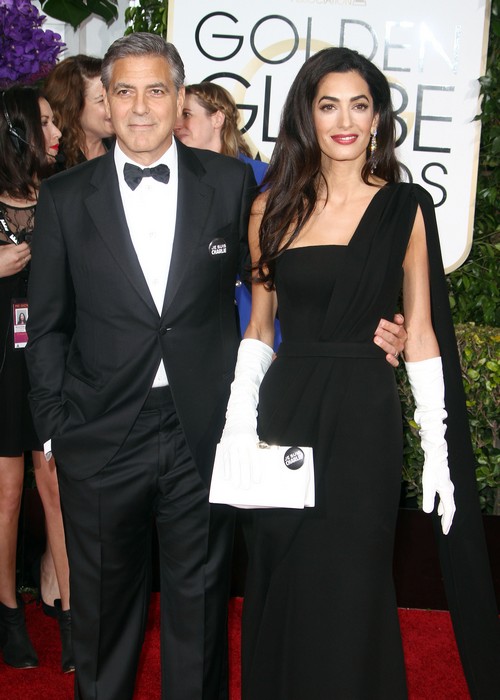 Amal Alamuddin and Giuliana Rancic were never going to be best friends, but I also didn’t think that Amal would ever degrade herself to the point of having a feud over her fashion style with an E! talk show host. However, a new report from Star Magazine claims that Amal has put Giuliana on her ‘hit list’ after the two had a falling out after the Golden Globe Awards. See, Giuliana Rancic gushed and gushed over Amal’s gloves when interviewing her on the red carpet with George Clooney, but then trashed the style on the Fashion Police later!

I mean, anyone familiar with Giuliana Rancic shouldn’t be surprised by this – she’s great at sucking up to celebrities on the red carpet, but in the comfort of her own set and with her peers on the Fashion Police, she feels like the boss.

Star’s source adds, “Giuliana was so desperate to grab them on the red carpet, she even waved around a bottle of George’s brand of tequila. Giuliana couldn’t coo enough over Amal’s gloves but then when everyone on Fashion Police made fun of them, Giuliana went right along with it!”

And apparently, Amal Alamuddin has time to sit there and host a vendetta against Giuliana, even though she’s preparing for a major court case. Star’s ‘source’ even adds, “One thing is for sure, Giuliana will never get to speak to George again – not as long as Amal is around!”

Guys, come on. Does anyone really think that Amal Alamuddin would hold a grudge against Giuliana Rancic of all people? And over gloves, no less? This is a made-up feud in ever sense of the word, trust us. Amal Alamuddin might be worried about Angelina Jolie and Sandra Bullock, but Giuliana Rancic is probably a non-entity to her. Besides, George Clooney can protect Amal against such slights, can’t he?