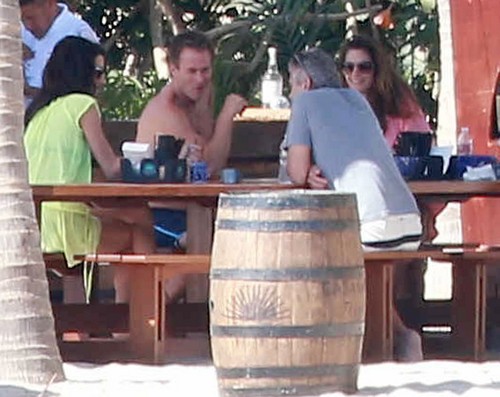 Amal Alamuddin was hoping to be Angelina Jolie’s new best friend but it looks like that won’t be happening! Angelina Jolie is on the hunt for some new best friend material in her life, according to a new report from “OK!” magazine – and according to CDL that new best friend will never be Amal Alamuddin, George Clooney’s new wife and high profile lawyer. Angelina Jolie has apparently burned all of her bridges before the age of 39-years-old and doesn’t know what to do with herself now. She’s surrounded by her husband Brad Pitt, their six children and a sea of people who she wouldn’t dare to call a close friend.

Rumors say that George Clooney has been trying to push Amal Alamuddin onto Angie, but Angie can’t stand Amal because of her defense of brutal dictators. Angie has always been a humanitarian and doesn’t find Amal to be quite up to her standards in order to become close friends. No surprise there since Amal has made public statements of extreme views on the Middle East as well as defended dictators accused of perpetrating the very crimes Angelina Jolie is trying to stop with her humanitarian work.

It’s about time – because Angelina Jolie has been such a lone woman without friends for so long. Women can’t really offer up their trust to a woman who has stolen another’s husband, so we’re guessing that is the case now. It only makes sense that despite being married to Brad Pitt, Angie’s friends still don’t want to get too close because she’s allegedly a bit of a cheater. You can’t trust beautiful people who want to skeeve around your husband and possibly steal him, right?

The source said, “Brad thinks it would be healthy for her to bond with women and set a good example for their daughters. Now she’s on a mission to find female confidantes.” You know Amal Alamuddin won’t be one!

You know what would really be good? If the television networks pitched this as a new reality show. It worked for the likes of Paris Hilton. Who wouldn’t want to tune in to watch Angelina Jolie in search of her new best friend? Except maybe Jennifer Aniston… but I’d totally watch that trainwreck. Would you? Hit the comments and have your say.

Actor George Clooney, his wife Amal Alamuddin and their friends, Cindy Crawford, Rande Gerber are spotted relaxing on the beach in Cabo San Lucas, Mexico on December 26, 2014 by FameFlynet