Angelina Jolie and Amal Alamuddin Hate Each Other: Divided by Humanitarian and Political Issues (PHOTO) 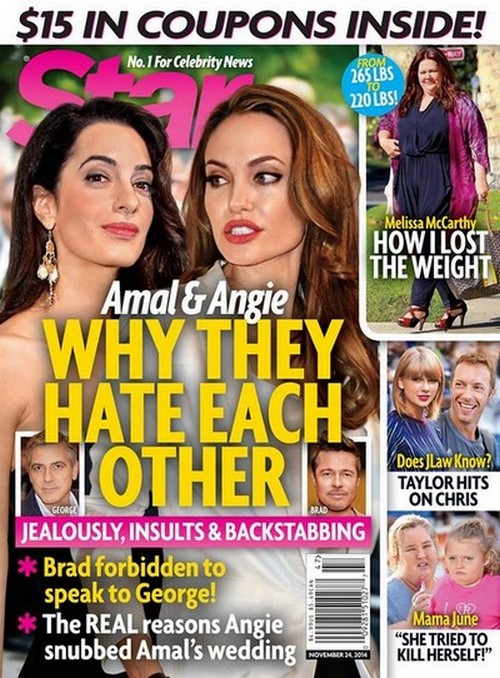 The Tabloids are reporting that Angelina Jolie and Amal Alamuddin hate each other complete with jealousy, insults and backstabbing! In fact Star promises to tell us why Angelina snubbed Amal and George Clooney on their wedding day. We were one of the first to report on the Angelina Jolie/Amal Alamuddin feud based our report upon Angelina’s obvious snub of Amal’s wedding and the evidence of some of Amal’s more extreme political viewpoints and representation of scoundrels who have trampled all over human rights which Angelina professes to hold dear. Of course, it’s still a rumor, but there is now more substantiated evidence to support the fact that maybe – just maybe – Angelina Jolie is not a huge fan of the new Mrs. George Clooney.

Star Magazine apparently took inspiration from CDL and decided to upload their own version of the Angelina/Amal feud, but they’ve added in a bit about how George Clooney and Brad Pitt are forbidden to speak to each other. Right, because their wives control their actions? Why do the women get painted as shrill, frigid shrews and the men as passive, subservient followers? Trust me, George Clooney and Brad Pitt aren’t going to stop speaking because their wives are not best friends. If that was the case, then Ben Affleck and Matt Damon would have stopped being BFFs a long, LONG time ago.

Anyway, even though there’s not much we know about this situation, we do know that Angelina Jolie and Brad Pitt very consciously didn’t attend Amal Alamuddin’s wedding or after-parties to George Clooney. Now, some part of that was obviously them avoiding a messy media situation, but another part is supposedly because Angelina’s not very fond of Amal, her political views, and some of the brutal dictators and their henchmen she has defended. I would say there’s possibly some active dislike and there have been reports in the past about how the two have avoided each other at UN events and the like. Facts are that Angelina Jolie considers herself a humanitarian and Amal Alamuddin has represented people who all humanitarians hate, and for good reason. Not exactly too hard to understand why Angie is “disgusted” with Amal.

Star also has a report about how Taylor Swift hit on Chris Martin after his conscious re-coupling with Jennifer Lawrence, which I’m still not sure actually happened. Plus, Taylor ain’t gonna betray her BFF JLaw, so there has to be more to this story, right?