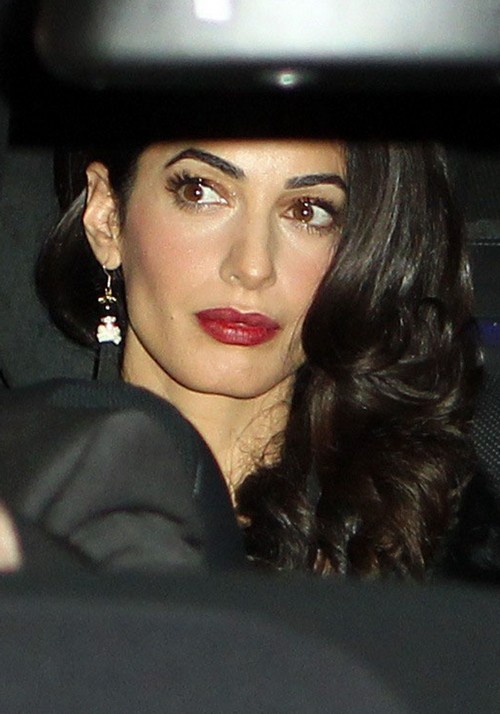 The Enquirer claims that this latest Brad Pitt/George Clooney feud is all due to Brad Pitt’s ‘snobbery’, with their ‘source’ explaining, “This is going to enrage Brad and Angelina, but George has had enough of their snobbery. He’s always remained friends with Jen after she and Brad divorced, but George didn’t make things public out of respect for his friend. All that’s changed now.”

Apparently, George Clooney is furious that Brad Pitt and Angelina Jolie snubbed him and Amal Alamuddin by not attending their wedding, and then not sending them a wedding present. So now, he’s retaliating by asking Brad’s ex-wife to dinner? Right.

Ok, if we’re dissecting this story, there is obviously a reason that Brad and Angelina didn’t attend George’s wedding, but I doubt it has anything to do with their ‘snobbery’. Apart from Brad and George not being besties like the press keeps pretending they are, there’s also the fact that George’s wedding was a messy media spectacle. However, that didn’t stop the likes of Matt Damon and Emily Blunt from attending, so there’s obviously another reason, right? We can easily deduce – especially since it’s been rumored for months – that Angelina Jolie isn’t too fond of Amal Alamuddin, and supposedly even avoided her during a recent UN event.

That’s not how you should act with your husband’s buddy’s wife, right? I don’t think it’s a full-blown feud, but it does seem like Angelina, and by extension Brad, are not in love with George’s new wife, and as such, didn’t really want to attend his wedding or take part in his nuptials. Or you know, they were just lazy. Whatever the reason, the media is now taking every opportunity to turn it into a feud between George Clooney and Brad Pitt, but I think that’s overblown as well. Their friendship has survived divorces, breakups, and rumors in the past, I’m sure it can survive this.