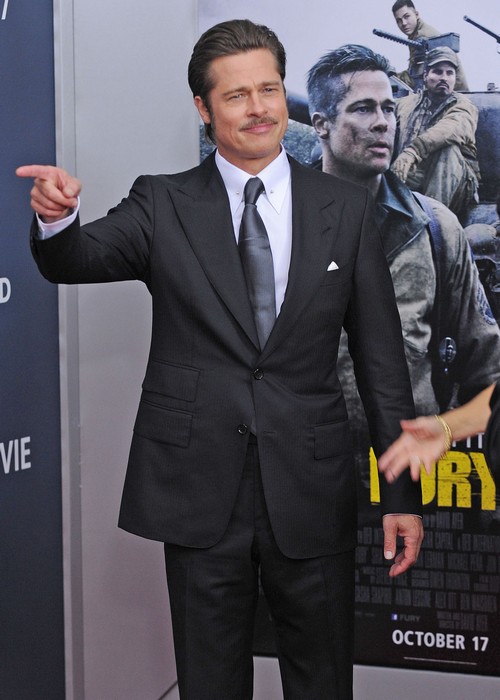 Brad Pitt is excellent at shading other actors on the down low, and he’s not above slyly insulting one of his BFFs, George Clooney. See, Brad Pitt and Angelina Jolie got married in a super undercover ceremony earlier last month, but George Clooney and Amal Alamuddin outdid them [and everyone else] in the most extravagant, fame-whorey wedding of all time. The press was there, the paparazzi was there, the fans were present in droves, and the whole thing was publicized to death by the media. So basically, Brad Pitt went ahead and called out George Clooney for being a massive publicity hound, although he didn’t use those exact words.

While promoting Fury, Brad spoke to the Associated Press at the film’s world carpet premiere on Wednesday. When asked about the pact that he supposedly had with George Clooney about whether they would get married, Brad Pitt laughed and stated, “We did it for the right reasons.”

It’s possible that by ‘we’, Brad meant himself and George Clooney. However, most people are taking the ‘we’ as Brad and Angelina, which means that Brad basically told the press that he and Angelina got married for the ‘right’ reasons and George Clooney and Amal Alamuddin… didn’t. Isn’t that you guys took from his statement? Either Brad is praising his friend, or totally calling him out for being a giant famewhore. I’m going with the latter, only because Brad and Angelina did have such a low-key ceremony – and it couldn’t be more different from George’s ridiculous media-palooza wedding.