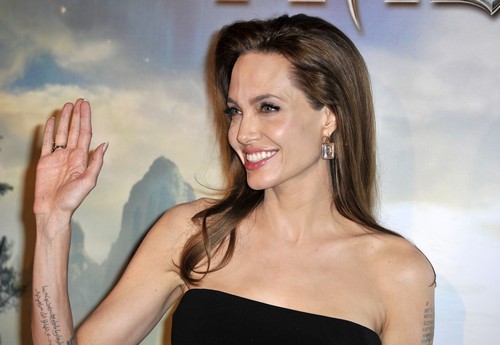 This has got to be one of the funniest stories that the tabloids have ever released. Apparently, Angelina Jolie is ‘miffed‘ that George Clooney is engaged to Amal Alamuddin because they are about become America’s most famous humanitarians, a title that used to belong to her and Brad Pitt.

Um, sure. Angelina Jolie is taking time out to hate on George Clooney’s new fiance because she’s angry that that there’s yet another smart and hard-working humanitarian with a connection to a Hollywood? If anything, I’m sure she’s ecstatic that Amal is engaged to George, because now she finally has someone to talk to when George and Brad are hanging out. Because let’s face it, Angelina having fun with Stacy Keibler or any of George’s ex-girlfriends? Or even having an intelligent conversation with them, for that matter? Yeah, not likely.

Anyway, the Enquirer’s ‘source’ explains, “Angelina’s fed up with all the fuss being made over Amal. She’s tired of pals urging her to befriend Amal because of her impressive work as a humanitarian lawyer. Angelina’s worked hard to establish herself as THE celebrity humanitarian, but now that George has Amal on his arm, she feels threatened that she and Brad, who also does charity work, can be knocked off their pedestal.”

What a load of crock. This source also ‘explains’ that Angelina would never admit to feeling insecure about her status as the #1 Celebrity Humanitarian, so she’s instead making up stories about how George is moving ‘too fast’ with Amal, and telling everyone in their inner circle that instead.

First of all, when does Angelina have time to be spreading these cockamamie stories? Also, being a movie star and being a lawyer are very different things, and I don’t really think that they compare – at all. Amal’s getting attention right now because of her connection to George Clooney, but in no universe is she ever going to come close to Angelina’s level of fame.

Elle Fanning and Angelina Jolie attend a photocall for the film ‘Maleficent’ at Hotel Bristol on May 6, 2014 in Paris, France.