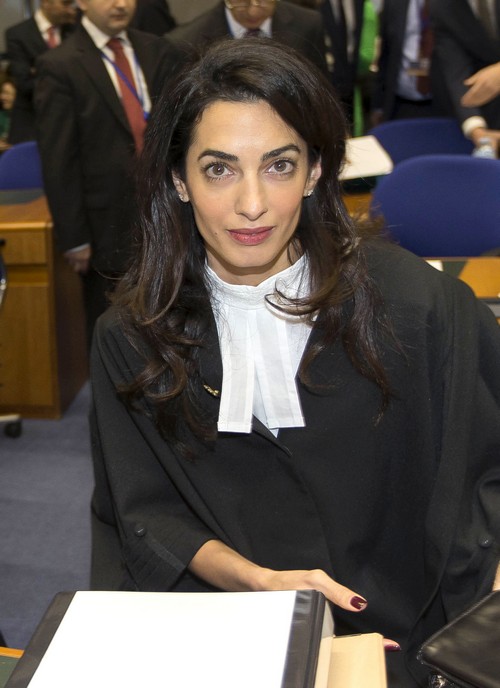 Divorce rumors about George Clooney and Amal Alamuddin have naturally hit the interweb but could they be substantive? Lately stories about marriage disagreements over starting a family and having a baby have led the divorce talk but might that change to political disagreements between George Clooney and his lovely wife Amal Alamuddin? Looks like Amal Alamuddin’s job doesn’t consist solely of her going to George Clooney’s events in Hollywood and looking like a showpiece wife. According to reports, Amal Alamuddin is appearing in European Court of Human Rights top human rights court to ‘argue against a man convicted for denying the 1915 Armenian genocide.’ Yes, Amal Alamuddin is trying to repress freedom of speech, something we pride ourselves upon in America – and what does her liberal husband George Clooney think of this? Is George disappointed with some of Amal’s political and legal viewpoints or do they share them?

Dogu Perincek had argued that his right to free speech was utterly violated when he denied the genocide and was convicted by Swiss courts. And for those who don’t know, the Armenian genocide was caused by almost 1.5 million Armenians being killed by Ottoman Turks during World War I. Although there is some debate on the actual death toll, most historians classify the event as a genocide. However, Turkey claims that the death toll isn’t accurate and was inflated to make it appear as though there was genocide, when in reality they feel that the deaths were all a result of the civil war.

Basically, this man denied that there was a genocide in 2005, and was then convicted by Swiss courts. However, he fought back and won in the European Court of Human Rights when he argued that his freedom of speech is being denied. But alas, there is now an appeal – led by Amal Alamuddin – to argue against Dogu Perincek, who they feel deserves to be held responsible for his ‘crime’. As in, the crime of saying what he feels? Whatever people believe, there is a fundamental right to free speech in our country, isn’t there?

People deny the Holocaust every day in public and in print but we don’t charge them with crimes for doing so, do we? It’s not like this guy is going around and causing unrest or fomenting violence, but just expressing his opinion. While I don’t agree with his opinion, since there definitely was an Armenian genocide, it’s still just that – his opinion. As Voltaire said, “I do not agree with what you have to say, but I’ll defend to the death your right to say it.” And here we have George Clooney’s wife arguing against Perincek for expressing his opinion? For all the praise Amal Alamuddin gets, it’s things like this – and representing dictators and tycoons – that  raise eyebrows. Will Amal’s controversial politics and activities as a lawyer eventually lead to her being ostracized by Hollywood and cause a George Clooney divorce?