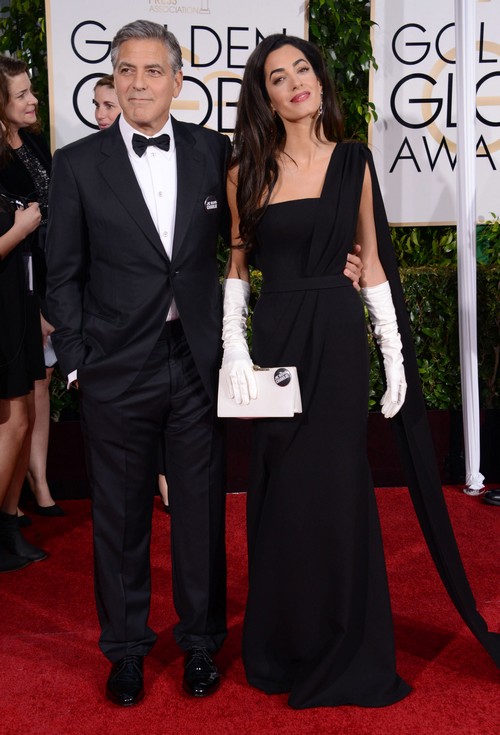 George Clooney and Amal Alamuddin are still married, despite efforts from the tabloids to divorce them before they hit their one-year anniversary. Of course, there’s so many rumors about George Clooney and Amal Alamuddin’s divorce that I wouldn’t be surprised if the stories had some basis in fact – especially since Amal seems to have gone all ‘Hollywood’ since we last saw her.

She’s turned up with George at every major event – which is to be expected – but she also looks as though she’s lost 10 pounds. No doubt the pressure to fit into the industry is getting to her, but we also wonder – what’s up with her career? The whole reason George Clooney finally settled down was because he found this ‘amazingly brilliant’ woman to be with, with her own successful career to boot, but what happened to that career? It seems like Amal’s just quit the industry to come live in LA and be George Clooney’s showpiece wife, another one of his bimbos, which is just a sad waste of talent and further proof that Hollywood ruins even the smartest people. Of course one has to ask exactly how smart Amal really is if she so quickly has adopted the traits of women who act like showpieces for famous men – Kate Middleton anyone?

Granted, I still don’t think that’s necessarily grounds for divorce – especially since George and Amal have barely been married four months. Let them stay married for another year, and then we’ll see how long their union lasts. Despite outward appearances to the contrary, I don’t think Amal is fully comfortable with Hollywood nor George’s intimate relationship with several of his successful female co-stars. I don’t think she’s merely jealous, per say, but I do think that she has a lot of insecurities about fitting in. Again, one can’t blame her considering the people that she’s constantly surrounded with, but at the same time, she’s Amal Alamuddin. She’s a ‘successful’ UN lawyer and yet she feels the need to fit Hollywood standards?

If anything, that’s what’s eventually going to drive them apart – not some silly story about George Clooney flirting with Sandra Bullock. Do you guys agree? Let us know your thoughts in the comments below.