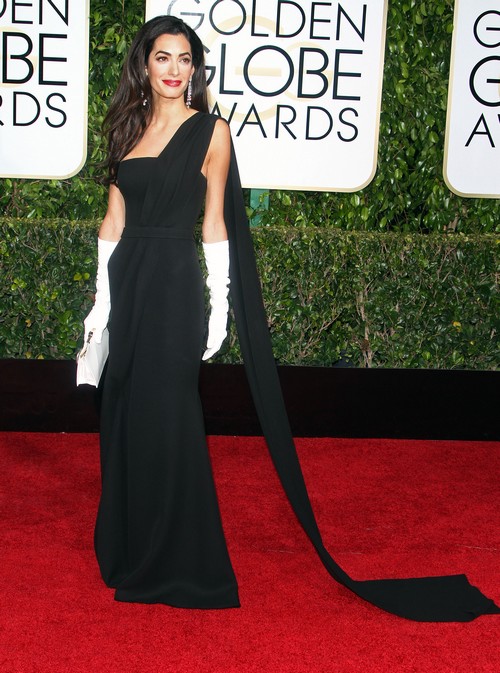 Looking at Amal Alamuddin last night at the Golden Globes one could see that the big shot lawyer is looking skeletal as though she has given up food. Is it possible that the pressure of being under the spotlight with George Clooney is getting to Amal? Is she becoming obsessed with her appearance? We’ve seen this happen before to women cast into paparazzi’s web. They go ‘skinny.’ Check out the photos and tell us what you think.

What girl could ever grow tired of being treated like Hollywood royalty? Well, apparently George Clooney’s new wife Amal Alamuddin is totally over it, and has had enough of rubbing elbows with celebrities and being the center of a media frenzy. Barbara Walters may have just named Amal the “Most Fascinating Person of 2014,” but George’s wife is not fascinated by the celebrity company they have been keeping – and she wants her old social circle back, full of ridiculously wealthy socialites and over-educated politicians.

According to the January 19th edition of Star Magazine, “While many would assume the gorgeous human rights lawyer would fit right in, insiders reveal that Amal has already grown tired of the Hollywood social scene that she feels is beneath her. Amal is one of London’s big-name attorneys. She is highly educated (as are all lawyers, big deal) and she is accustomed to spending time with doctors, lawyers, scientists, and writers (again, big deal). To go from that to hanging out with people like Channing Tatum and Jonah Hill, two of George’s closest friends, just isn’t her style.” What a joke – after all she is married to George Clooney who just dated a WWE star, speaking of low class. If her highness can tolerate George surely can put up with his friends?

Star’s inside source goes on to explain that, “Amal is also fed up with George’s old habit of having his friends tag along with them on their vacations. She doesn’t want to hurt George’s feelings, but she can’t stand being around the guys, she struggles with coming up with something to talk to them about.” Well bad luck for Amal because she just spent a long holiday vacation with George’s friends Cindy Crawford and Rande Gerber.

Wow. Maybe we are just shallow, but what kind of a girl could possibly be unhappy with George Clooney or not want to hang out with his friend Channing Tatum? Sadly the media and Hollywood have made such a spectacle of Amal Alamuddin and the actor’s wife thinks that she is completely about it all. What do you think of George’s new wife? Is she a bit on the stuck up side? How long will her and George’s marriage last if she keeps trying to drive a wedge between him and his “beneath them” friends? Let us know what you think in the comments below!

Update: If the Golden Globes 2015 photos are anything to go by then Amal is fitting in just fine in Hollywood – she looks as though she has already given up eating!