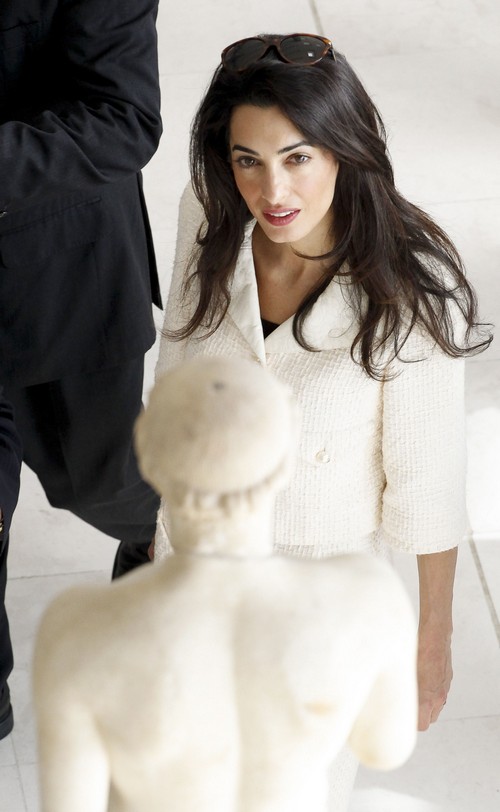 Amal Alamuddin might be a controversial lawyer, but the only reason she got the honor of being the ‘Most Fascinating Person of 2014’ is because she married George Clooney. Barbara Walters just bestowed the dubious ‘Fascinating’ honor on Amal Alamuddin this morning, and snippets of the interview have already been released on ABC. However, I personally think that Barbara Walters crosses a small line when she compares Amal to Jackie Kennedy and Princess Diana.

While I’m sure that Amal is now used to the paparazzi attention, that doesn’t mean that she is anywhere near emulating Jackie Kennedy OR Princess Diana. Being George Clooney’s long-suffering wife for a few months does not equal [in any way, shape or form] being married to the President of the United States, and it certainly doesn’t equal what those ladies went through. The most Amal Alamuddin goes through is a bit of name-calling and accusations of family connections, but by and large, she lives a very privileged life.

Lucky her – she’s bagged George Clooney and now she’s the most fascinating person of 2014, which only got bestowed upon her because of her marriage to George Clooney. As far as we know, she’s had no public cases this year, she hasn’t tried to expand her income level, and she hasn’t used the George Clooney name to do anything to boost her career. While that’s all fine and low-key, the sheer amount of famewhoring that came before the marriage was a sight to behold. Venice weddings, church weddings, staged photo-ops, the whole thing was like a circus wedding, except with two famous celebrities instead of animals.

Either way, I’m not sure if Most Fascinating Person of 2014 was warranted, but Amal Alamuddin’s famewhoring paid off eventually, didn’t it? What is fascinating is that Barbara Walters would choose Amal Alamuddin with her extremely controversial political views and history of representing brutal dictators accused of human rights violations as Most Fascinating Person 2014. What do you guys think? Let us know your thoughts in the comments below.