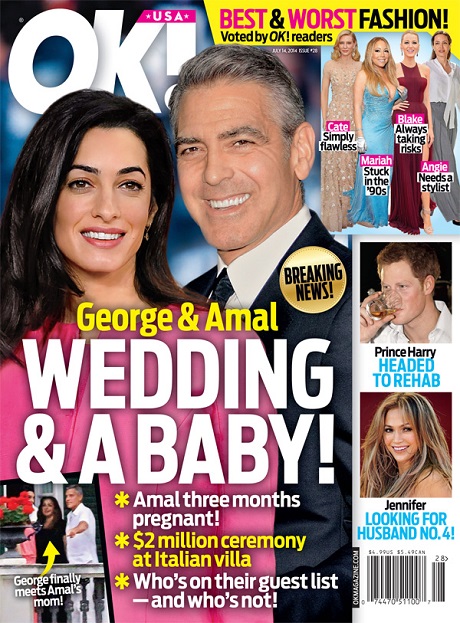 Amal Alamuddin and George Clooney are getting married very quickly, in contrast to their perennially engaged friends, Angelina Jolie and Brad Pitt. They’ve only been engaged for a few months, but sources have already revealed that Amal and George have been scouting wedding locations for the past few weeks. The wedding will reportedly take place in Italy at Lake Como, which isn’t very surprising.

What is surprising is OK! Magazine’s cover issue stating that Amal is three months pregnant. A source tells OK!, “Amal’s friends reportedly noticed a slight protrusion. Amal had a little bump around her stomach, which showed through her dress.”

Apparently, the reason for all the haste is because Amal is starting to show, and she and George want to get married before people figure out that she’s pregnant. I mean, it’s kind of stupid because people are going to figure it out anyway once she starts showing a few months later. But maybe she just doesn’t want to be judged by her extended family, who are all reportedly very religious and wouldn’t be very happy with a baby being born out of wedlock.

OK!’s cover also features a story about Jennifer Lopez looking for husband #4, now that she’s officially broken up with Casper Smart. Plus, Prince Harry is allegedly heading for rehab to curb his drinking and non-stop partying, which I very much doubt. If Harry really was dealing with substance abuse issues, the Palace would have him on lockdown faster than you could say Las Vegas.

What do you guys think? Is Amal really pregnant? How long will it take for J.Lo to find a rebound [if she hasn’t already]? And is Harry in some alcohol and drug-induced trouble? Let us know your thoughts in the comments below.