Amal Alamuddin Pregnant – Is that Why George Clooney Proposed Marriage? 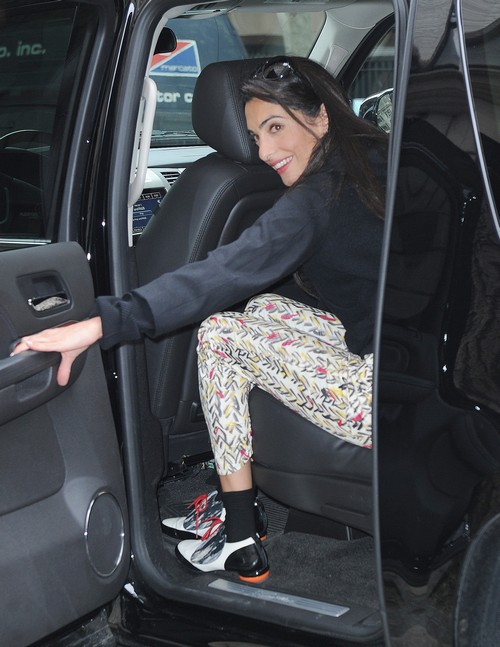 Who would have thought that this day would finally come? George Clooney is actually engaged, and to a legitimately impressive woman, no less. Amal Alamuddin doesn’t need George to boost her career, not after being a world-famous lawyer and activist in her own right. However, even if George was interested in Amal from the get go, it’s definitely curious that they should choose to get engaged now – especially when George has been incredibly vocal in the past about his views on marriage.

Sure, he’s finally met the ‘one’ – and I’m sure that’s the narrative that will get tossed around for the next few months. But really, what’s the reason behind their sudden engagement? Some people are saying that it’s because George realized that he would never find anyone better. Others are saying it’s because it will help him with a political career. Some are even saying that it’s because he’s really, truly in love. But the most interesting whisper seems to be that Amal might be pregnant, which would definitely come as a surprise.

Consider that George’s ex-girlfriend, Stacy Keibler, keeps posing with her growing baby bump and new husband, maybe George thought it was time for him to move on, too? However, even if Amal’s pregnant [by plan or by accident], I’m pretty sure that George would have proposed eventually. He’s finally in a relationship with someone who’s on his level, who doesn’t need him any more than he needs her. He can actually be proud to show her off to Hollywood, as opposed to his dirty laundry list of past romances.

What do you guys think? Is Amal pregnant? Is it a coincidence that she and George are getting engaged now, just weeks after Stacy’s pregnancy announcement and wedding? Or is the notorious bachelor finally in love? Let us know your thoughts in the comments.