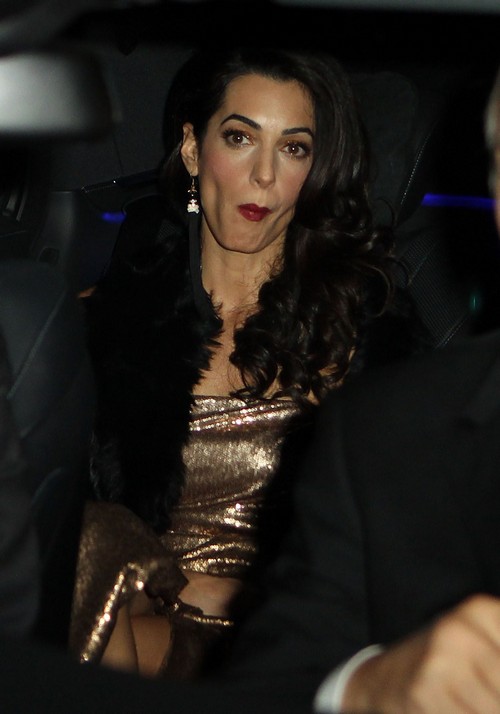 Amal Alamuddin has gone from life as a fairly well known high profile lawyer to being as famous and photographed as the top of the A-list almost overnight. Questions arise as to whether Amal is reacting to her new-found fame with extreme dieting and weight loss – there are even rumors of anorexia since her marriage to George Clooney.

There is a LOT of Amal Alamuddin gossip in the wake of her wedding to George Clooney, which shouldn’t surprise anyone. After all, Amal did just get married to Hollywood’s former most eligible Bachelor, and everyone’s curious about her life.

First up, we got a report from OK! Magazine claiming that Amal was really insecure about her weight and crash-dieted before the wedding. You know, I totally buy that she went on some sort of juice cleanse or some other ridiculous celeb fad, only because she knew the whole world [and paparazzi] would be watching.

There’s also been a lot of noise about a feud between Amal Alamuddin and Angelina Jolie, even though George’s reps shut down the story via Gossip Cop. But what’s interesting is that the story didn’t even make it to the tabloids before George’s reps got it shut down. As Celebitchy points out, the timing of the story is pretty interesting. Usually, celebrities don’t care about tabloid rumors and reports, especially when it comes to A-list celebrities like George Clooney and Angelina Jolie. But the fact that he got this specific story shut down? Maybe Amal Alamuddin and Angelina Jolie weren’t exactly bosom buddies when they met. You know the whole thing about two Alpha males/females never getting along? Well, Angelina and Amal are quite similar, and you’d think that they would get along like house on fire – except maybe the exact opposite happened, and they were encroaching on each other’s territory? It’s definitely curious.

Plus, now that Amal Alamuddin has become George Clooney’s wife – and provided that they don’t get a divorce within the next year – she’s forever going to be in the spotlight. She should prepare herself for a lifetime of media scrutiny and speculation, and so should her family. I almost feel bad for what she’s going to face over the next few years.