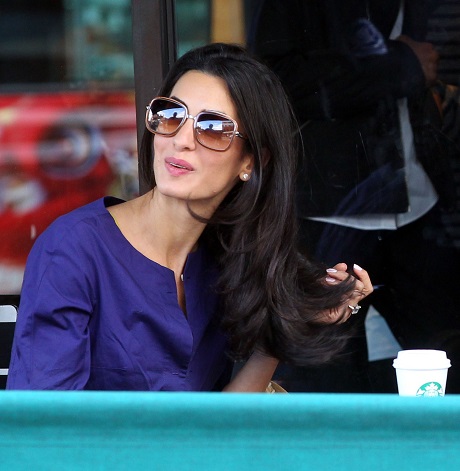 Unlike many of their movie-star counterparts, George Clooney and Amal Alamuddin actually plan on getting married in the foreseeable future. Then again, George has always been a man of his word, and if he proposed to Amal, you know he meant it. New reports also confirm that George and Amal have already received their marriage license, and are all set to wed in Italy.

Amal and George had a public notice put up at the Chelsea Old Town Hall in London, which is apparently a requirement for British nationals [in this case, Amal] who are marrying abroad. We know that Amal and George plan to wed in Italy, but we don’t know the specific dates. But if they’ve already applied for a marriage license, I’m sure the paparazzi will begin swarming Lake Como from tomorrow.

It does make sense that the wedding would happen pretty quickly, since we’d also been hearing about Amal’s family flying in to Como and visiting the area. Plus, there were also recent reports confirming the news that Amal and George had been scouting wedding locations in Italy, although I still think they’re going to go with Como. This way, they’ll have some semblance of privacy, and even if there are paparazzi there, it’s not like they can get close enough to the island to get proper pictures.

Then again, if they go somewhere else, they have a shot at hiding from the media. With a wedding this size, I think paparazzi presence is unavoidable, and George probably knows that.

What do you guys think about George and Amal getting married so quickly? Let us know your thoughts in the comments below.