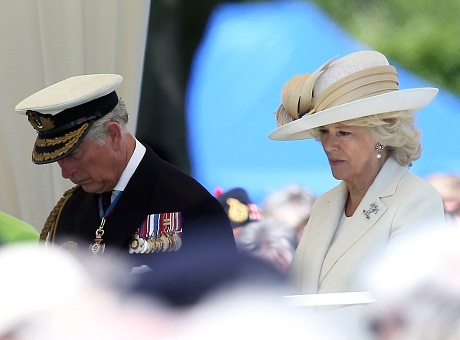 Angelina Jolie has been working hard to increase the spotlight on sexual violence in conflict zones, and her recent Global Summit was a roaring success in that sense. Because of Angelina’s involvement, people all over the world covered the summit, something that they may not have done if such a high-profile celebrity wasn’t hosting the event. And now, even royalty is getting involved!

Angelina met everyone’s favorite future Queen Consort, Camilla Parker-Bowles. Angelina and Camilla met at Clarence House to discuss their campaigns on aiding rape victims, and I have to say, my opinion of Camilla shot up by a thousand because of her involvement in these issues. In fact, I’m surprised that out of everyone in the royal family, only Camilla turned up to meet Angelina. What, were Prince William and Kate Middleton too busy (with not working) to meet Angie and discuss such an important campaign?

Camilla has reportedly been very vocal about helping rape victims in the UK, visiting crisis centers all over the country and creating campaigns to provide victims with fiscal and emotional support.

Seriously, why was Camilla the only one getting involved with this? I get that it’s an issue close to her heart, but I was actually surprised by the lack of high-profile politicians and celebrities at the Global Summit. Sure, we got Amal Alamuddin and the usual group of humanitarians, but where were the other celebrities, the ministers, the royals?

Perhaps Angelina preferred to keep the event low-key, but I can’t imagine that to be the case, especially since they spent so much money trying to get as much press coverage as possible. Or perhaps she didn’t want anything to detract from the main focus of the evening, which is more possible.