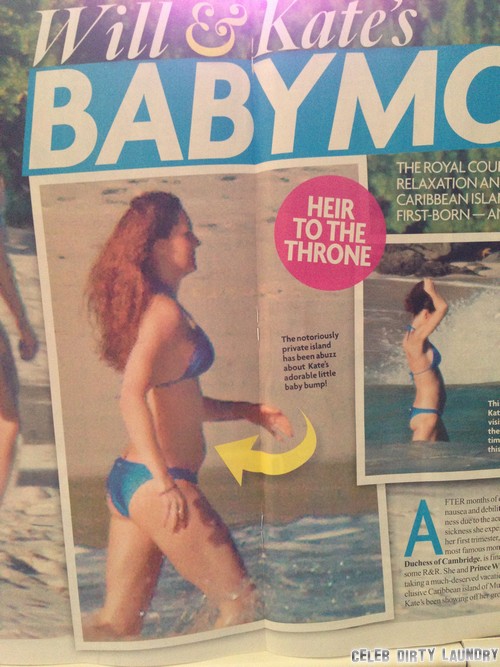 It’s been nearly three months since Kate Middleton’s pregnancy was announced, but the Duchess refuses to show more a couple of pounds of baby bump. We were starting to think the pregnancy was a publicity stunt, but new photos of her in a bikini with a gently protruding belly—confirmation that there is a royal bun in the commoner’s oven. Kate and Prince William are in Mustique with the Middleton family, where they’re enjoying sun and sand before returning to London—and to their royal duties.

“Kate really wanted to get away one last time before the baby is born,” an insider told Star Magazine, print edition February 25, 2013. “William agreed that it would be a great idea.” Kate is notoriously unemployed, and has only made one official public appearance in the last two months, so you may ask what she needs to “get away” from. Palace life with teams of servants and unlimited wealth can’t be all that stressful, can it? But she and Wills went all out, renting a private villa next to Kate’s family.

“Kate said she loved the feeling of being pregnant and how it’s transforming her body,” the insider said. We have to point out that Kate’s baby bump is what the rest of humanity call a food baby, which is a tiny bump one gets after feasting during the holidays. Kate will not be one of the famous moms who gains 90lbs while pregnant—she is probably still a size 2 or 4! After her scary hospital trip, Kate is healthy and good spirits, and “even joked about how the pregnancy is making her butt bigger, but . . . she feels sexy!”

William is still working search and rescue for the RAF in Wales, so the couple is “really making an effort to reconnect on this trip and go back to being just a normal couple for a while.” The two played on the beach in matching royal blue colored swim wear. The witness say’s they’re inseparable; “William joined Kate for an early morning swim; they were touching and kissing in the waves. When they came out of the water, he got down on his knees in front of Kate and kissed her baby bump.” It sounds like they’re really a normal couple! We’re sure the Queen would raise an eyebrow at their scandalous behavior, but she’ll have to deal with it!

They’re in no rush to get back to “royal pomp and duty,” but Kate has an engagement at Hope House, Action on Addiction, next Tuesday, so no hope of a long extension! We’d love to see Kate in a few more months when she’s really showing, but expect that after the publishing of these photos, her baby bump will be on strict house arrest!