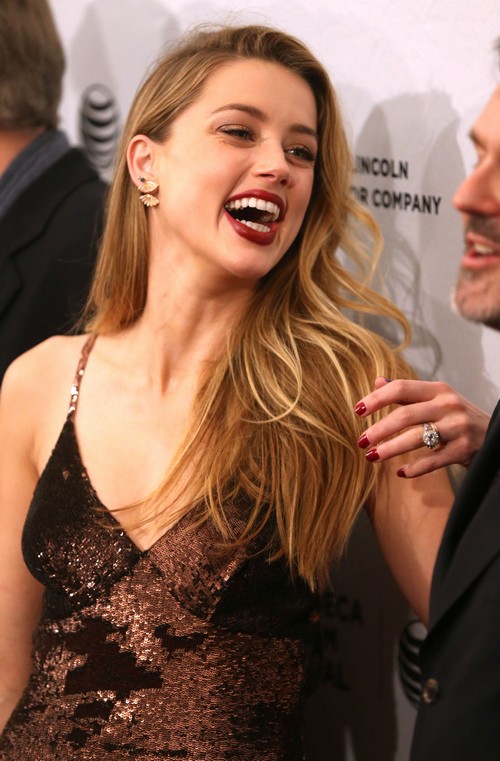 Amber Heard was spotted getting drunk and partying around NYC last week according to new reports, and her new husband, Johnny Depp, was conspicuously missing from her side. Even though Johnny Depp is usually the one drinking and getting wasted, it looks like Amber’s trying to give him a run for his money.

Right now, it’s only a matter of time before these two break up and get a divorce, even though they just got ‘officially married’. We all know that Amber Heard was just using Johnny Depp for his name, his career, and his fame, but all of that is slowly drifting away amid Johnny’s mid-life crisis.

Meanwhile, Amber’s not the best at hiding her true intentions, and most people could see that she was a gold-digging famewhore from a mile away – and even though she tried very hard to fight that image, it just became more and more apparent as time went by. However, her career barely benefited from Johnny’s involvement, likely because he was too busy making terrible career decisions himself.

Plus, now that Johnny’s career is more or less reaching its end, will Amber really stay in connection with him? Of course not – she has nothing to gain from it, and she’s already expended so much energy into faking real affection for Johnny that it’ll be interesting to see her suddenly ‘stop’ caring. Then again, she and Johnny Depp did JUST get married, so she’ll probably not want to go public with that anytime soon. It doesn’t matter if they’re already discussing very vaguely story ideas, but that’s my two cents on the subject.

What do you guys think about Amber Heard getting drunk, and do you think that Amber partying without Johnny Depp is a bad sign – or does it not matter? Will Johnny and Amber end up staying married without too much drama? Let us know your thoughts in the comments below.