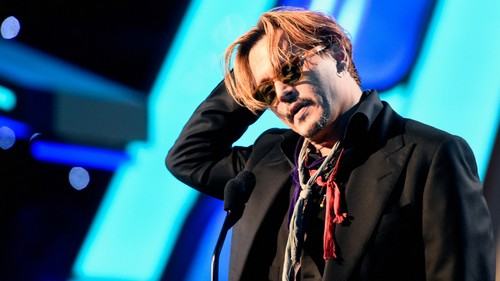 Johnny Depp took the stage at the first ever televised Hollywood Film Awards, and made a total drunken fool of himself. On November 14th Depp stumbled up on the stage at the awards show to present an award to Mike Myers for his recent documentary. The Pirates of The Caribbean star channeled his inner Jack Sparrow and swayed back and forth in front of the stunned audience trying, and failing, to read the teleprompter. Eventually Depp’s saucy speech was cut off by producers due to his string of curse words, which mind you weren’t strung together well.

Johnny Depp and his fiancée (who is young enough to be his daughter) Amber Heard have reportedly been on the rocks for quite a while and rumors are that their wedding is off. Does a relationship with that big of an age gap ever really last? And, Johnny’s drunken appearance at the Hollywood Film Awards occurred literally just a few days after tabloids reported that Amber Heard was cheating on Johnny Depp with her Magic Mike XXL co-star Channing Tatum.

The December 1st edition of Star Magazine reveals that Amber Heard is mortified by how Johnny Depp acted at the Hollywood Film Awards, and his latest charade might just be the straw that broke the camel’s back. Rumor has it that Amber and Johnny’s wedding is off! Star’s inside source reveals, “Amber couldn’t believe he had made such a fool out of himself. This reflects really badly on her, and she’s not happy about it. There’s a chatter in Johnny’s camp about rehab. At this point he is driving everyone away – including Amber.”

So have you see footage of Johnny’s drunken meltdown at the Hollywood Film Awards? Is Amber dumping him because of it, or did she already dump him and that is why he was on a bender? If our fiancée embarrassed you like that would you kick him to the curb? Let us know what you think in the comments below!