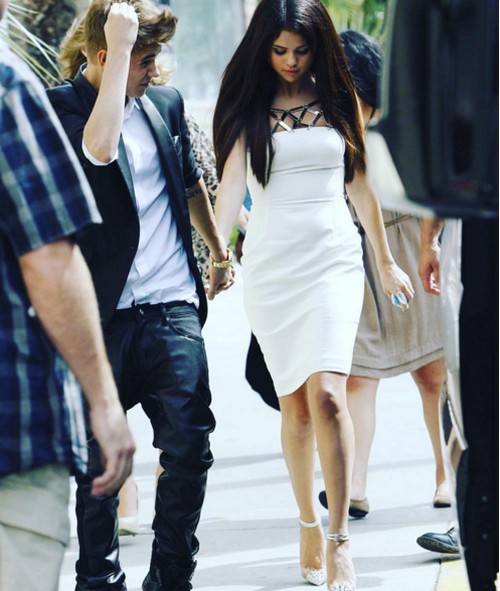 Justin Bieber shared a cute throwback photo of himself and Selena Gomez holding hands to derail SelGo’s new steamy hookup with One Direction singer Niall Horan. Just one day after news that Selena may have a new man, Justin shared the cute picture because it seems that he just can’t let Gomez move on to someone else and be happy.

Selena Gomez and Niall Horan were caught kissing on Friday, December 4 during a birthday party for Jenna Dewan-Tatum. There are also reports that Gomez left the swanky party at Bootsy Bellows with Horan and it’s unclear if the young celebs were heading to their own homes or if they were headed somewhere together.

It’s sounding like Selena and Niall met up at the birthday party on purpose. A source for Us Weekly described how the “Same Old Love” singer was hugged up on her new One Direction fling: “Niall got there first with his bodyguard, then the next thing I know, I looked over and Selena was there. They were very close together, talking and whispering.”

By the end of the evening, party attendees at Bootsy Bellows claim that Niall and Selena were locking lips and looking very much like a couple.

Apparently Selena’s new romance didn’t sit well with Bieber, who took to Instagram just one day after the SelGo dating news and posted a picture with Selena that was captioned, “Crazy throwback.” That is when the debate started over whether Selena should stick with her One Direction crush or give Justin Bieber another chance.

Although neither Justin or Selena have ruled out getting back together, they haven’t actually reunited in recent weeks like many suspected. Justin was seen serenading the “Good For You” singer inside the Montage Hotel back in November. Justin sang “My Girl” and his newest release “Sorry” for his former girlfriend and everyone was certain there was a Jelena reunion in the works.

It turns out that Selena Gomez might actually be smart enough to not reunite with the Biebs this time around though. Instead Gomez is opting to drive Bieber mad as he is inundated with stories about the “Slow Down” singer heating things up with the One Direction hottie Niall Horan.