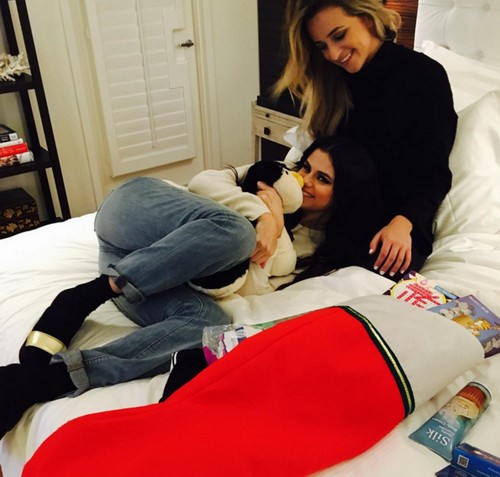 Selena Gomez isn’t looking at a dating drought anymore and now the “Same Old Love” has to choose if she wants to date Joe Jonas or Niall Horan. After a bit of a dry spell since ending things with Zedd back in April, it looks like Gomez just filled up her free nights because there are two young singers chasing after the “Slow Down” singer.

Selena was seen at a party with Niall Horan from One Direction on Friday, December 4. The party was for Jenna Dewan-Tatum’s 35th birthday bash at Bootsy Bellows nightclub in Los Angeles. There were quite a few famous faces at the party and there were also several accounts claiming that Selena Gomez was getting really close to Niall Horan.

Apparently there was no kissing going on but Niall had his arm around the “Good For You” singer and was rubbing her back as if they were very comfortable with each other.

Ashton Kutcher and Mila Kunis were at the star studded party along with Adam Levine and his wife Behati Prinsloo, who obviously were trying to squash rumors of their marital issues last week.

Lea Michele was on hand to sing for the party and so was Niall Horan, who seemed to get Selena’s attention with his song. After quite a bit of flirting, Gomez ended up leaving the party with Horan according to an inside source for Entertainment Tonight.

That means things don’t look good for another of Selena’s suitors. Joe Jonas has been stepping up his game ever since Gigi Hadid broke his heart and started dating Zayn Malik. Joe surprised the “Come & Get It” singer with an early Christmas gift. Selena posted a picture on Instagram of her laying across her bed with a stocking as big as the pint sized singer.

Selena captioned the photo, “After the show is the after party. Thank you @dnce for my stocking!!! ☺️” Selena was referencing the fact that both she and Joe Jonas performed at the 2015 Jingle Ball together on Thursday, December 3.

Joe gave a lot of stockings out to his closest celebrity pals but Selena’s stocking was looking pretty special and we wonder if Joe is trying to put the moves on Selena Gomez now that he knows Gigi Hadid has moved on. A hookup between Joe and Selena would be perfect considering that Gigi moved in on Zayn Malik when she knew Gomez was interested.