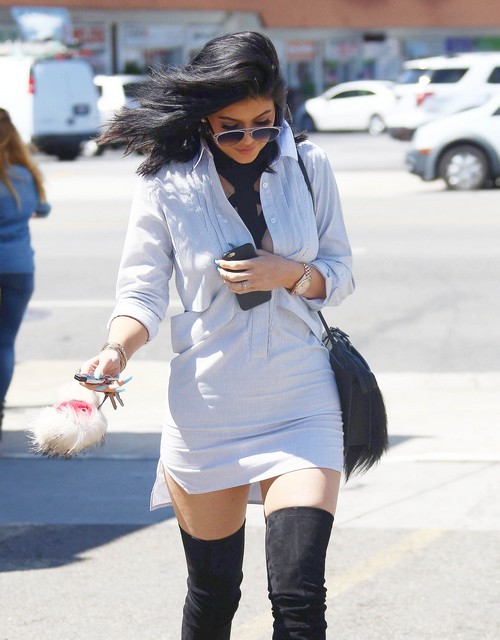 Is Justin Bieber planning on stealing Kylie Jenner from Tyga when she turns 18 years old? It’s a new week and that means a new Instagram scandal for Kylie Jenner. The Keeping Up With The Kardashians teen shared a photo of herself in a crop top with her hair in cornrows on Instagram and was accused of being racist. Yeah, we don’t really follow the logic there either. Regardless, her boyfriend Tyga didn’t even jump to her defense, but her pal Justin Bieber did!

Justin jumped to Kylie’s defense in the middle of the backlash – which Hunger Games star Amandla Stenberg even jumped in on, and he said, “Guys leave her alone, were all trying to figure it out and she happens to be under a microscope! I’m the first to know this. But saying she’s being racist because she wants her hair in braids is ridiculous.” Hate to say this, but we’re going to have to agree with Justin Bieber on this one. The Kardashians might be a lot of things, but racist is probably one of the last words we would use to describe them.

Regardless, the bigger picture here is that Justin Bieber had Kylie Jenner’s back. And, according to insiders he has always had her back – and can’t wait until she is 18 years old and legal so that he can swoop in and steal her from Tyga. A source close to Biebs dished to CDL, “Justin has always had a huge crush on Kylie, but he has kept it platonic because of her age. He refuses to sink to Tyga’s level and date someone underage. Justin is constantly telling Kylie that she can do better than Tyga. After the sex scandal with Mia Isabella, Justin knows this is the perfect time to make his move. He is counting down the days until she turns 18 next month, he is probably more excited about Kylie’s birthday than she is!”

Do you guys think that Kylie would dump Tyga for Biebs? Would they make a cute couple? How would Selena Gomez react? Let us know what you think in the comments below!