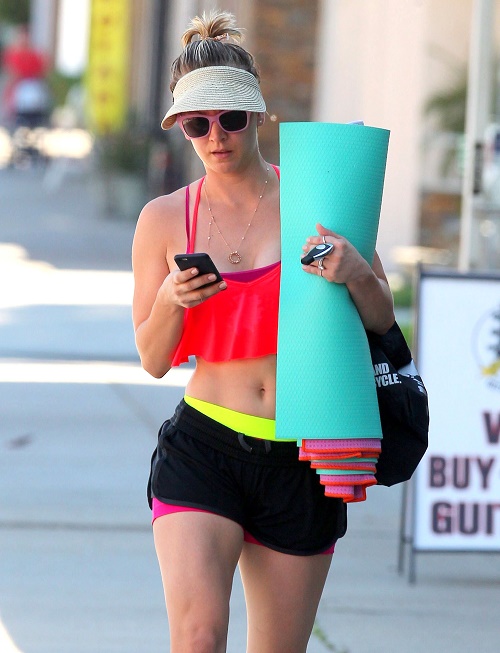 Are Kaley Cuoco and Ryan Sweeting getting a divorce? The Big Bang star and tennis player Ryan Sweeting famously married in 2013 after a whirlwind romance and only knowing each other three months – Kaley confessed after the fact that they moved in together after their first date. Everyone was skeptical of their relationship and was certain they would crash and burn – and according to new reports that is exactly what happened. Sweeting and Cuoco’s marriage is hanging on by a thread and they are on the verge of a divorce.

The April 13th edition of OK! Magazine reveals, “A couple of months ago tensions came to a head and Kaley and Ryan came to a blowout fight: they’ve barely been seen together since the January 16th premiere of her film The Wedding Ringer. And she wasn’t at his first match of the year in Maui.” So, what went wrong with Kaley and Ryan? Well, what didn’t aside from the obvious fact that they rushed into marriage before they really knew each other.

OK! Magazine’s insiders also reveal that money has been an underlying cause of tension in their relationship, “As with many couples their radically different paychecks have been a source of friction. Whereas Ryan has struggled to regain his pro rankings since back surgery in 2013 – his tournament earnings so far this year are just $1,560 – Kaley is raking in a million dollars per episode of her hit sitcom Big Bang Theory.”

Insiders dished to OK! Magazine that the odds of Kaley Cuoco and Ryan Sweeting getting their marriage back on track and avoiding a divorce are slim to none – Kaley has actually been hanging out with her costar and ex-boyfriend of two years Johnny Galecki. Ironically, since Ryan stopped joining Kaley at events, Johnny has been showing up at her side, and they have been hugging and flirting on the red carpet just like they used to when they were secretly dating.

Are you shocked that Kaley’s whirlwind marriage to Ryan Sweeting is falling apart? Or are you just shocked that they lasted this long? Do you think Kaley Cuoco and Johnny Galecki are going to get back together? Let us know what you think in the comments below!