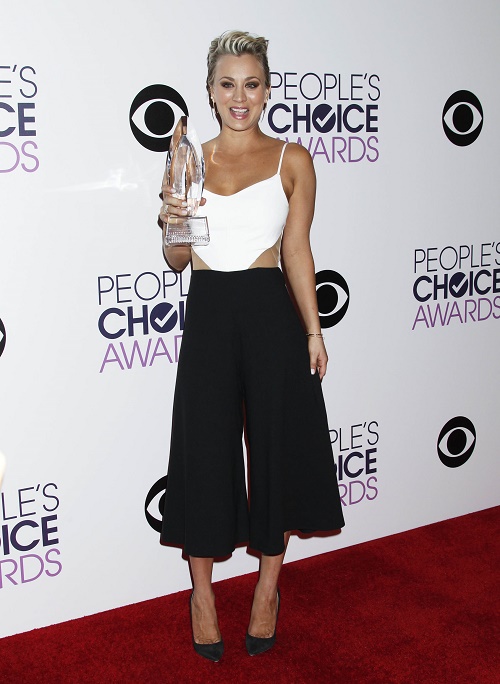 Kaley Cuoco’s recent nose job has been put her right back in the center of controversy, with Kaley claiming that it was due to her sinus allergies and everybody else suspecting that it was for cosmetic reasons. Kaley was recently on the Ellen DeGeneres show and she addressed the rumors, and used her husband Ryan Sweeting to do so.

In a completely transparent ploy to make people think that her nose job was natural, Kaley addressed her sleeping troubles post-nose job, and admitted that Ryan videotaped her while she was sleeping. There’s some long story about how she couldn’t sleep properly and didn’t believe that she was sleeping, and thus he videotaped her to prove that she was snoring, and therefore, sleeping. My whole takeaway from this is Kaley Cuoco attempting to explain away her nose job with medical reasons, and at the same time, proving that she and Ryan are just fine.

Of course, the fact that she forgot to mention her husband’s name at the People’s Choice Awards says something, but she addresses that mistake as well. Don’t let anyone every say that Kaley Cuoco doesn’t understand how meticulous PR works, i.e. her PR showmance with Henry Cavill.

Plus, Kaley also tries to claim that her addiction to Afrin nose spray is what caused her sinus issues, and hence, the need to get a nose job. However, many, MANY celebrities use sinus problems as a way to explain why they got a nose job, and it’s hard to separate the liars from the ones who are being genuine. I mean, Kaley’s trying hard to launch a film career, even though her TV career has made her one of the most financially successful actresses in the arena. But Hollywood is Hollywood, superficial people are superficial, and insecure people are insecure. It’s just the nature of the game, and Kaley probably falls into that category.

What do you guys think about Kaley’s comments on the Ellen DeGeneres show? Do you think that Kaley and Ryan are having issues, and will get a divorce? Or are the divorce rumors just an overreaction from the media? And do you believe that her nose job was actually sinus-related, or for cosmetic purposes? Let us know your thoughts in the comments below.