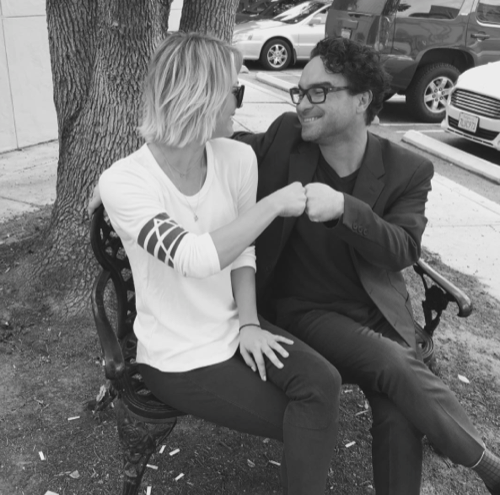 Both Kaley Cuoco and Johnny Galecki posted photos on Instagram to let the world know that they are NOT having a secret affair and Galecki isn’t a homewrecker. When the news broke in September 2015 that Cuoco filed for divorce from Ryan Sweeting – her husband of 21 months – speculation was that Johnny had something to do with the split.

“The Big Bang Theory” stars are now addressing those rumors with some humor. And the actors are quick to say that the only sparks flying are between their characters – newlyweds Penny and Leonard. But in all fairness the speculation wasn’t unwarranted. Cuoco and Galecki did date for two years and it wasn’t until they broke up in 2009 that fans of “TBBT” found out.

Johnny Galecki posted a black-and-white photo of he and his co-star Kaley sitting on a bench – she’s shrugging her shoulders and he has his hand clenched in a fist and a very unhappy look on his face. The photo Cuoco posted is also black-and-white and the two are fist bumping with smiles on their faces. Galecki’s photo is captioned, “No scandals / home wreckers /pregnancies here, y’all. Just profound friendship.” Kaley’s photo is captioned, “So sorry to disappoint, but no home wreckers or secret flings going on here. Me and @sanctionedjohnnygalecki are just the best buds – Leonard and Penny will just have to suffice!!!”

Days after the Kaley Cuoco and Ryan Sweeting divorce news hit came rumors that the marriage was ending because the former tennis pro refused to go to rehab for his drug and alcohol addiction. In addition to alcohol and drug abuse Sweeting was once charged with possession of a controlled substance – Adderall – with intent to sell or deliver. Those charges were eventually dropped and the case was closed.

So, “The Big Bang Theory” co-stars and former lovers are NOT dating. Johnny Galecki isn’t a home wrecker and Kaley Cuoco isn’t pregnant. What do you think? Is it possible for the two – who are both technically single – to work so closely together and not resume their romantic relationship?

Let us know what you think in the comments section below and come back to CDL all your celebrity news, gossip and rumors.