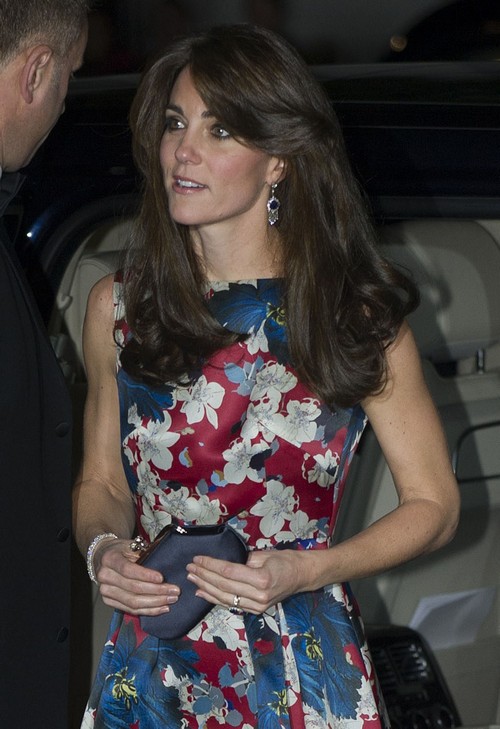 Kate Middleton glided back into the scene after giving birth to both Prince George and Princess Charlotte looking like she had never even been pregnant. Some conspiracy theorists jump to odd claims that Kate was never pregnant, while others wonder if the Duchess has an eating disorder.

With this latest round of royal rumors, the National Enquirer claims Kate is battling anorexia. “She’s suffering big time… Kate’s consulting a leading British medical expert who is treating her for the early stages of anorexia,” that mag states.

It’s no secret Kate Middleton spent a ton of money of regaining her post-baby body back after giving birth to Prince George and Princess Charlotte. Personal trainers, dieticians, and even the help of Carole Middleton helped the Duchess bounce back to her toned body. Of course, being fit to begin with always helps, too. Not to mention the impact of breastfeeding.

If there was any concerning moment when it came to Kate Middleton’s weight, it was her Dukan Diet before her wedding to Prince William in 2011. Kate was bony and almost scary-skinny for her wedding day, and even the founder of the diet felt the Duchess went too far. “I think she lost too much. At the beginning she had good cheeks. Now, she has no cheeks,” French nutritionist Pierre Dukan revealed to NY Daily News in 2014.

Since then Kate has seemingly found a healthy weight. The Duchess of Cambridge returned from her 4-month long maternity leave with new bangs while clearly faking her perpetuated happiness and thrill at every event, but still looks physically healthy. Naturally, the Palace dismissed the claims Kate Middleton’s eating disorder as complete rubbish.

The NE seems to be laboring under the guise of old royal habits. Princess Diana famously battled bulimia for years after feeling she looked “heavy” in her engagement photos. Eventually, insiders close to Diana wrote about her struggles and claimed Diana began treatment with a doctor at Guy’s Hospital in London.

However, that doesn’t mean Kate Middleton has broken under the pressure of royalty. By all accounts, Kate strives to maintain her great physical shape, but does not have an eating disorder.

What do you think of the rumors of Kate Middleton’s alleged battle with anorexia? Is the Duchess of Cambridge keeping an eating disorder secret? Let us know your thoughts in the comment section below and come back to CDL for all your Royal news and updates!